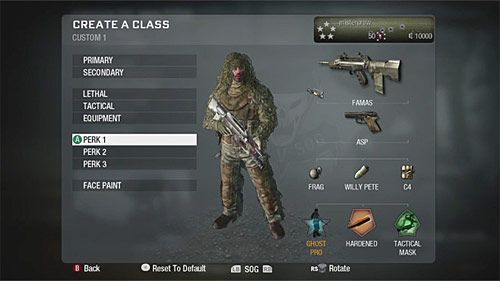 It’s time to check out a bunch of new Call of Duty Black Ops 2 perks that are rumored to be introduced in the new version of the game, together with the three new game modes. Check out the list and details below, there is some really interesting information there and at least some of these perks sound like something that’s really likely to happen.

1. Spy – you appear as a friend on the map but when you shoot you are turning red on the map
– Pro perk: ability to detect enemy spies
– Elite perk: Airship will be marked as ally (if Pilot perk is active)

2. Escape Artist – when prone, you feign death (but you can’t shoot)
– Pro perk: When you are close to die, the crosshair of the enemy turns white and your name disappears
– Elite perk: Instead of diving, you fall into the feign death (if Diver perk is active)

3. Audiophile – Will show on the radar players with silenced weapons shooting at your or close to you
– Pro perk: You hear the footsteps louder
– Elite perk: Kniving shows on the radar (if Bladesman perk is active)

4. Defuser – When you thrown things, a circle appears around the crosshair and it fills in 3 seconds. If you wait for that to happen, you can throw 2 times farther.
– Pro perk: You can take semtex from players and throw them elsewhere and pick up enemy equipment and use.
– Elite perk: the circle fills in 1.5 seconds (if Quickdraw perk is active)

6. Diver– you can dive to cover and when you do it, you can still shoot but afterwards it takes a while to regain focus
– Pro perk: You can crawl twice as fast
– Elite Perk: You can sprint when crawling to move faster (if Extreme Conditioning perk is active)

8. Technician – Any land killstreak kills will count towards your next killstreak.
– Pro perk: Your Advanced UAVS will disable the enemies UAV
– Elite perk: Your sentries can’t be taken down instantly (if Defuser perk is active)

9. Bladesman – You have 2 knives in hand instead of one
– Pro perk: There’s a chance for you to dodge an incoming knife
– Elite perk: Kniving is silent and does not show on the killfeed (if Assassin perk is active and if it is not countered by the Audiophile Elite perk)

10. Conciousness – You are as accurate standing as you are when prone
– Pro perk: Your bullets cause more flinching.
– Elite perk: Shooting an enemy will mark him on the mini map (if used with Marksman perk)

12. Deep Impact – Bullets shoot through hard surfaces
– Pro perk: Each person that your bullets go through gives them 50% damage bonus
– Elite perk: when hip-firing, your bullets have 10% more damage with each person they go through. (if Steady Aim perk is active)