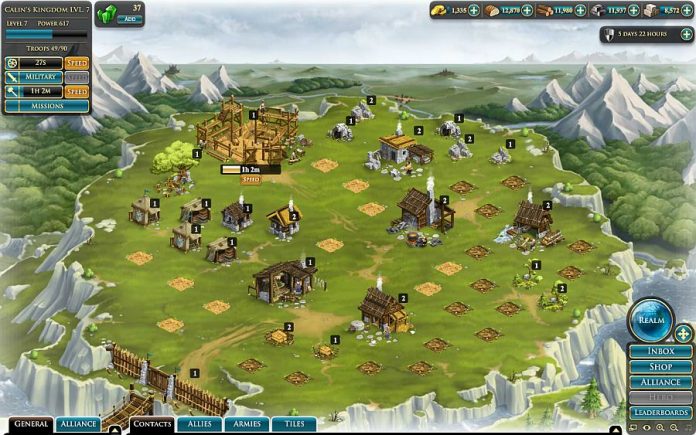 If you’re a more hardcore gamer on Facebook, looking for something more than growing daisies on your farm, Digital Chocolate have the answer for you with Kings & Warlords, their latest Facebook game that offers you a kingdom and challenges you to build up an army and become the best in the lands. Of course, this has been done multiple times in the past, but all we care is if Kings & Warlords does a good job and we’ll find out in this review!

As soon as you will start playing the game, if you have ever played a similar strategy title, you will feel at home as it doesn’t even try to bring anything new into play: you have your “kingdom” right there, with a limited number of plots waiting for you to build them up as you please and you have the world map just one click away, where other players, AI controlled cities and resource areas await to be attacked and conquered.

So basically, Kings & Warlords is split into two really distinct parts: building your kingdom and fighting (therefore the name of the game, with “King” addressing the building bits, while the “Warlords” are there for the fighting). When it comes to building, it’s all pretty basic: you click a plot in your kingdom, you select what you need to build there and you wait for the construction time to pass until you’re able to use your new building. You can also upgrade any and all your buildings, as well as research technologies that offer various bonuses – both production and military-related and that is about it.

The military part is a bit more exciting: you get to train troops, scout lands and attack. You can attack Dark Knight castles to plunder (these are AI controlled castles), neutral land plots that increase the production of different resources in your kingdom or other players. In battle, you can use boosts (known as charms in the game) and Heroes to boost your attack strength even further and there are some strategic options available, like the strategy (attacking, balanced or defensive), with the battles being detailed in a turn by turn short animation. 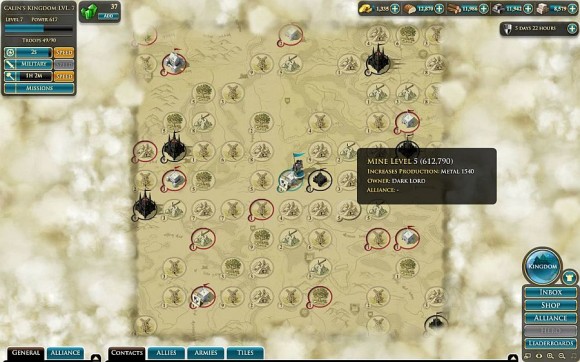 There is also an Alliance system going in Kings & Warlords and alliances should be joined unless you want to get farmed to death, and the game also offers an in-game chat section which isn’t really adding anything new to the roleplay value of the game. But at least it’s there.

One thing that I found pretty strange about this game was the fact that it starts with a tutorial that rushes you through the production of various types of buildings the game has on offer without really telling you what you are doing and why you need them. Even stranger, several missions into the game, I find myself tasked to upgrade my Castle, only to find out that I no longer have any Stone left, a resource highly needed for upgrades. And the only resource that I have only one building associated to its production, because this is how the game told me to build things. But at least I have maximum amounts of wood and food and metal and 2 upgraded producing buildings for each, buildings that are actually producing nothing, because the numbers are at maximum levels already. So I guess that a revamp of the tutorial is highly needed!

Apart from that, Kings & Warlords doesn’t really bring anything new to the table. If you played other strategy games similar to this one, then you probably know everything about it already. And while this is by no means a poor game, the fact that we’ve already seen everything it does in tens of other games on Facebook and mobiles already makes it bring little to the table. But if you are a fan of the genre and you can’t get enough of these games, or if you have never played such a title, Kings & Warlords is a great choice.