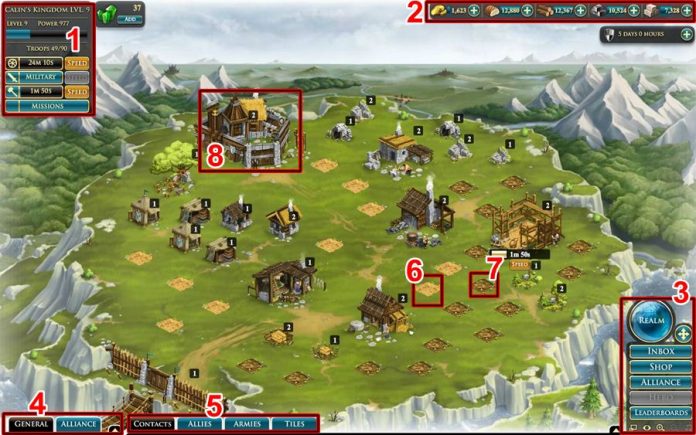 Kingdoms & Warlords is a brand new Facebook game that we have talked about already in my review of the game, but now it’s time to move forward and check out some tips and tricks for the game in this guide that tells you how to play and overall teaches you all the basics of the Kingdoms & Warlords gameplay, to make sure that you get the most out of the experience and have all what it takes to get your kingdom to the top.

There might not be much for advanced players in this Kingdoms & Warlords guide, but you should still read it because… you never know!

Let’s start by checking out your kingdom’s overview screen, the place where you’ll do all the building and army raising and management: 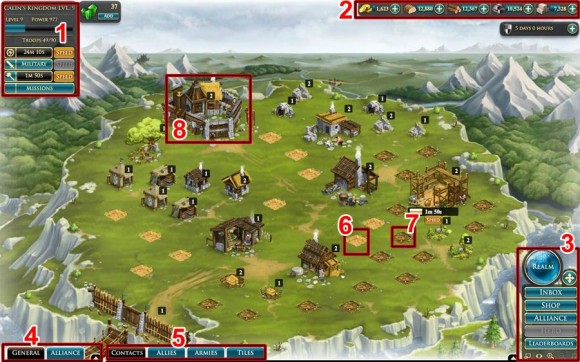 1. Kingdom’s overview: here you can see your level, and also handle research, train your army, construct new buildings and check out your missions.

2. A very important aspect, your resources. Stone is highly needed early on in the game for upgrades, so make sure that the first buildings to max out are the Quarries.

3. Game settings and controls: clicking the Realm button takes you to see the entire game world, you can check out your hero and alliance, change settings and go to the shop to spend some real money on in-game stuff.

4. The Chat section with Alliance or General chat options available.

5. More details about your allies, armies and tiles you own in the realm.

6. A building plot where only structures (Warehouse, Barracks or Cottage) can be built.

7. A construction plot where only resource generating buildings can be built.

8. Your castle – one very important building whose level sets the cap of buildings and upgrades you can have in your kingdom. 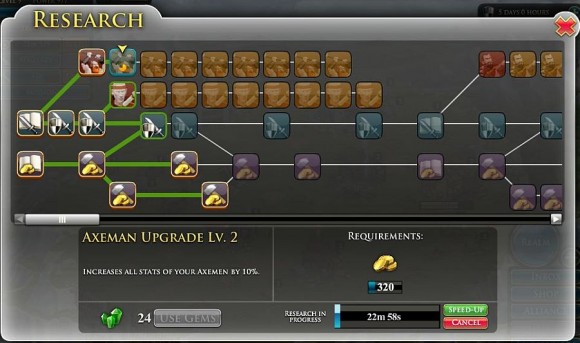 A very important element you have to keep an eye on is the research option in the game. Here, you can follow the paths to upgrade your knowledge of the world, unlock new unit types and improve all sorts of stats of your buildings, troops and production. 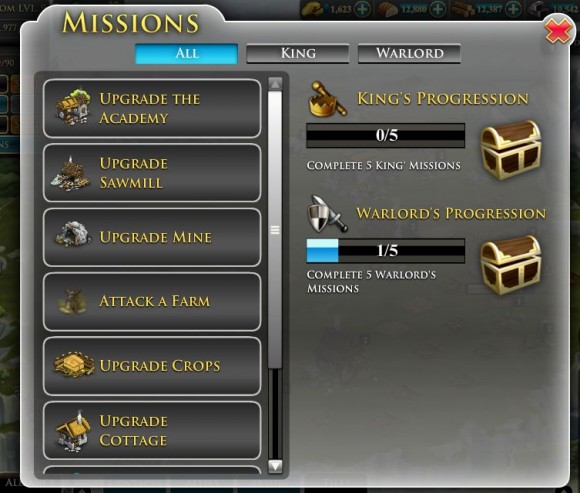 You should keep an eye on the missions as they try to guide you trough the game and suggest the correct order to build up your kingdom, even though they completely ignore the quarries which are by far the most important buildings early on… so if you think you’ve got the hang of the game, do it your own way and just check the missions every now and then to make sure that you collect rewards. 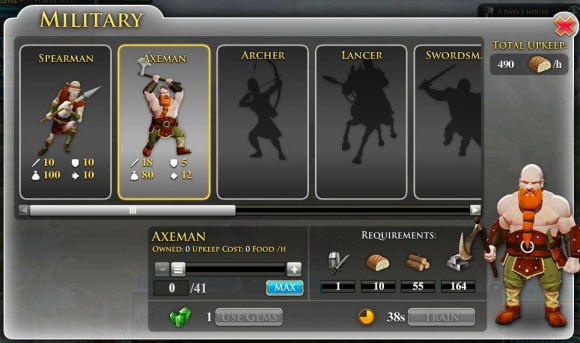 Building an army is a must in this game – the goal is to conquer as many tiles and plunder as many cities as possible, but even if you want to go the peaceful way, you still have to build up your military because other players might not agree with that mentality of yours and attack you. You should start building it early on, although you can wait a bit to do some research and do some better troop training not to waste space with crappy soldiers. 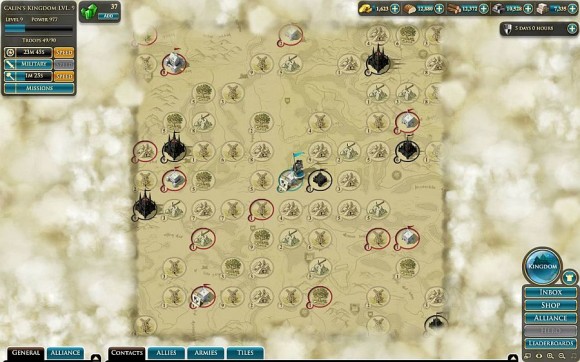 This is the place where you control your offensive and expand your kingdom. The user interface is very similar to the view of your kingdom, but here you can hover your mouse over different tiles to check out more details about them and start an attack (or send a spy for even more details).

Most likely, you’ll do a lot of attacking in Kingdoms and Warlords. Your game actually challenges you to attack a Level 2 Dark Knight castle to unlock a hero, but if you are unlucky as I was, you won’t have one nearby. So the only thing to do in this case is to build up your Inn to get spies and hopefully find a Level 2 Dark Knight-owned castle to attack in the fog of war and get your hero, which offers huge bonuses in battle.

Now when you decide to attack, all you have to do is to select a tile and a pop-up will appear, asking you how many troops you want to send: 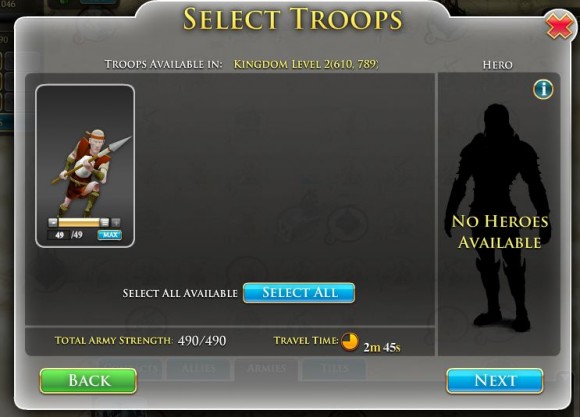 After selecting them, you have to select the Strategy. The more types of troops you have, the more “attack units” you will have and the more changing the strategy will affect the way the combat looks. You need a very strong frontline anyway, because if your front line retreats, the battle is lost: 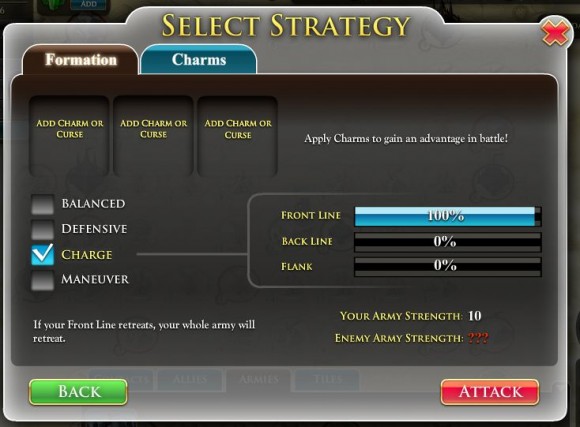 Balanced – You troops will go to their basic designed formations. This is a good tactic for when you have a varied number of units. This will also be the formation used when your army is defending.

Defensive – Some of your melee troops will reinforce your Back Line. This can be useful when you’re anticipating that your enemy will outflank you and attack your Back Line: having melee units defend your archers is vital when this happens!

Charge – Most of your units will go into your Front Line and strike directly at the enemy. With this tactic, you’re simply looking to crush the enemy quickly before their fancy tactics can change the tide of the battle!

Maneuver – More of your melee troops will go to the Flank instead of Front Line. This is a good counter for an enemy army with a lot of ranged units: you’re trying to hit their Back Line hard, destroying their archers before they can have a significant effect on the outcome of the battle!

In order to improve your chances in the battle, you can purchase and use various Charms from the same-named tab in the menu: 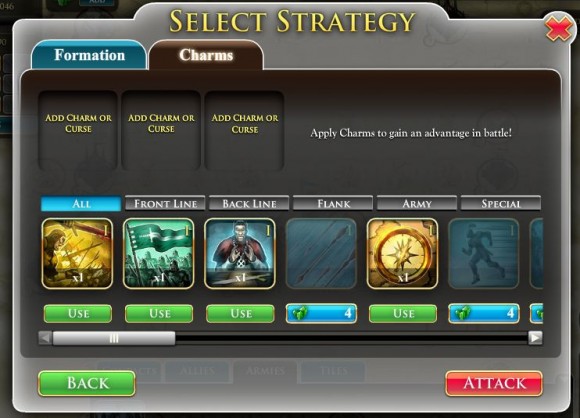 Next, you hit the Attack button, wait for the time to pass and hope that you will be the winner of the battle!

A good strategy would be to go for resource plots at start to improve your production and only raid Dark Castles when you are sure you are ready for them. Try not to attack human owned castles (especially those in alliances) unless you are really ready for retaliation from them and possibly their allies!

And this would be it – you now know how to play Kingdoms & Warlords and hopefully you’ll be able to get the most out of it!