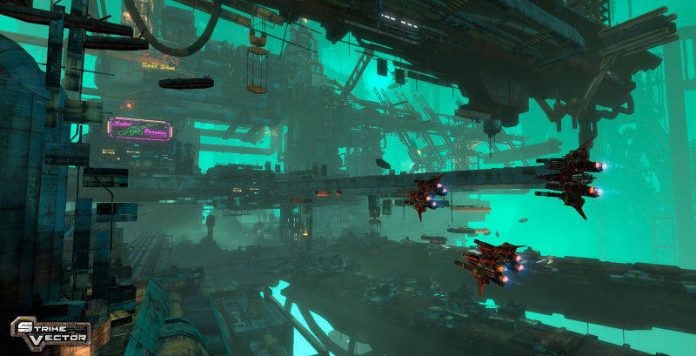 Last week Team Strike Vector debuted an impressive looking gameplay trailer for the upcoming Strike Vector, a 3D shooter that gives players control of futuristic dogfighters. I spoke with Cedric Lecacheur, co-founder of the company and head gameplay programmer about the inspiration for Strike Vector as well as the design decisions made in regards to gameplay

One I feel is always relevant with smaller teams; what games have you worked on in the past?

Have you been able to apply the experience from your previous games to Strike Vector?

Some of us have been working with the Unreal Engine for years. ‘I am Alive’ and ‘Remember me’ were both 4 years long productions. This experience helped us speeding up the prototyping process on Strike Vector.

What prompted you to make Strike Vector? Was a recent release the catalyst or were you inspired by an older game?

While working in large studios, we were frustrated because everyone has his own part to play and the occasions to influence the creative process are scarce. So we felt the urge to regain control over our work.

The recent success of some independent studios gave us the idea to start a small indie team focused on one simple and fun concept.

You mentioned that twitch shooters like Quake and Unreal Tournament have influenced this game, so what concepts have you taken away? Is there anything you feel the inspirational games did poorly that you’ll try to improve upon?

We refer to these games in terms of pace, action and manoeuvrability. We want to provide a game that gives instant access into action and makes it super easy to free-roam in these huge 3D structures. 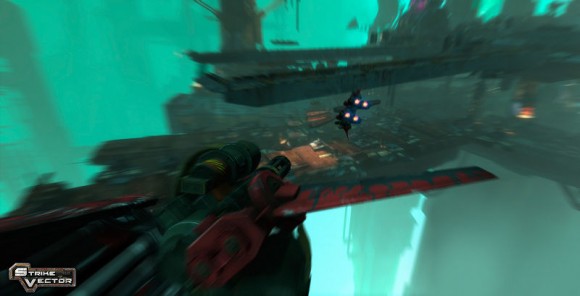 Strike Vector is going to be a 3D shooter, but a major feature of a lot of shooters is careful map design that controls player movement and creates chokepoints. How have you approached this given players can fly over or under obstacles?

The level design part is really challenging for us.We don’t have a lot of similar games to take example from. We can take inspiration from games like Crimson Skies or Rogue Leader for the control system or even the weapons. But in these old games, because of technical limitations, the levels were most of the time very basic and blocky. With the UE3, we can build massive and complex architectures easily without framerate drops wich is really something new for this kind of game.

Our approach of the level design is really based on iterative experiments. It takes lots of attempts and retries to build a map that is fun to explore and well balanced. We don’t have any magical recipe. As long as we have fun playing our own maps, we assume that the players will enjoy them too.

In the trailer ships appeared to fly out of docking bays. Will players be able to fly through the interior of the massive constructions, or is the inside only going to be used for spawning?

Depending on the map, you’ll be able to fly both in and outside. Flying through huge and complex structures is so much fun that we really want to push that far. 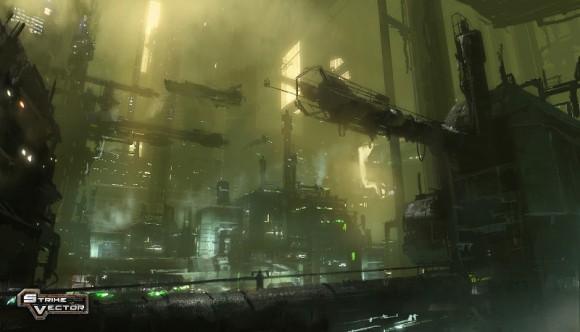 The screenshots I’ve seen seem to suggest that each ship has different weapons. Will players load out their ship prior to spawn and then launch, are you opting for the weapon pick up style seen in older shooters? If it’s the former, will players also be able to customise their ship?

Weapons are not specific to one ship type or another. You’ll be able to mount any of your weapons on any ship type, that’s for sure.

The way you get and equip weapons is still under prototyping so it’s a bit premature to talk about that.

And yes, you’ll be able to customize your ship.

Are there any interesting gun designs that you’d like to show off and talk about?

For the moment we have few weapons in the game. We are starting with the classic ones like the gatling or the homing missile launcher. The goal is something like 8 to 10 weapons max.

The reduced number of weapons is another inspiration from Quake and UT. You don’t need a thousand type of guns, they just need to be interesting and fun to play. 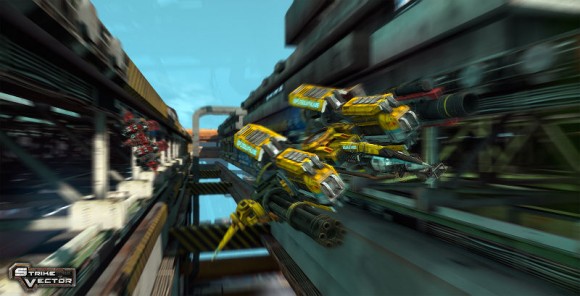 I wanted to clarify the Jet and Hover Modes; will the two methods of flight be implemented as distinct play styles, or is the intent more for Jet Mode to be like a “sprint” with most of combat emphasising Hover Mode?

Well, you could say that they’re distinct play styles as both modes have its own specificities and options. But, basically, the way you control your ship and aim at foes is pretty much the same in both move modes. This gives a great fluidity to the gameplay and encourages the player to constantly switch between modes.

The trailer seemed to showcase a deathmatch style game, but will we see additional modes such as CTF?

Of course, you’ll find all the must-have game modes you expect from any multiplayer combat game. Death match, team death match, capture the flag, domination etc… But above all, we are working to bring custom game modes that will magnify our specific move modes and gameplay options. 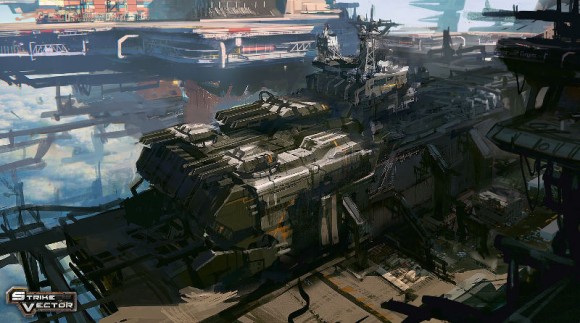 How much of the trailer we saw was actual gameplay, and how much was prerendered video?

All of the video footage was shot using the in-game engine. The combat scenes were recorded live during real 4 player combat. What’s the point in pre-rendering scenes when you have Unreal Engine spitting the whole thing in real-time ?

At the start of the trailer you mention that it’s still in progress, but frankly it already looks pretty good. What’s left to be worked on?

You’re right, we’ve got our core gameplay running but some features are still at prototyping stage and we have tons of ideas we’d like to experiment. The path from there to the delivery of a fun, bulletproof, balanced, complete game is long. So please be patient and stay tuned.

I’d be remiss if I didn’t ask this; any news on a beta test or the final release date?

There will be beta testing builds in a few months from now, but as for the final release, it’s still very tricky to provide a precise schedule.