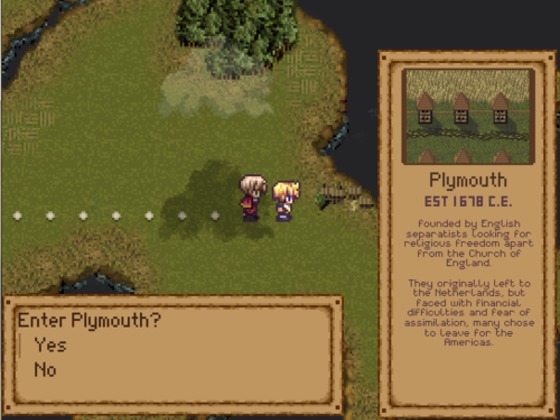 Americana Dawn is a JRPG that is visibly inspired from the first Suikoden games and Final Fantasy III, but comes with a pretty new concept and setting: the game takes place in the colonial America of the 18th century and delivers 30 hours of gameplay, plus a huge war system. All while trying to be as historically accurate as possible (even though the story itself is purely fictional).

Like all respectable indie games recently, Americana Dawn already has a Kickstarter page and the developer’s goal of raising $2,755 has already been met with 10 days left until the fundraising’s end. Here’s the plot summary of Americana Dawn, a very interesting one too:

A new chapter of history has begun with the age of discovery, the age of empires and the birth of the spirit Rarascau in the land Tsenacommacah. He is among the last of his kind, a dying race of beings who borrow their likeness from humans. Cursed with immortality that can only be undone by despair, they lend their power to the numerous civilizations of the world. Through spear, sword, and gun; their presence is timeless, they are the Keepers.

After being spirited away by one such being, Rarascau was renamed “Alfred” and was left in the care of the English colonists at Roanoke, only to watch the inhabitants vanish, then to Jamestown, to witness the Massacre of 1622 and, finally, to Plymouth. However, with the death of the settlers’ mediator, Squanto, nowhere was safe from the tumultuous skirmishes of the New World.

As a result, Alfred was hidden deep within Shenandoah Valley. One mishap after another, he found himself alone in the wilderness … for 133 years.

With the Keepers of the British Empire away in Europe, Alfred was asked to fight on under the colonists’ banner after the eruption of the French and Indian War. However, nearly a century of isolation had preserved his childlike innocence. Through twenty-eight years of countless trials, Alfred would transform from an innocent, gentle lamb, into a Tyger who would bear his fangs at the world’s greatest power.

A demo for this really promising epic title is scheduled for launch in July and we should get the full version of the game by the end of the year, during the cold days of Winter when a JRPG like Americana Dawn will certainly come like a sweet, tasty cup of hot chocolate.