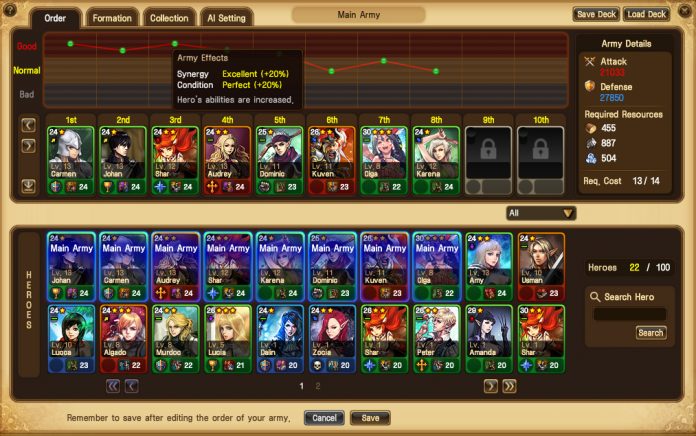 The card browser based game from OGplanet, Heroes of the Realm (HotR), offers innumerous possibilities when it comes to create a completely customized army. The game presents a high assortment of features that allow players to create their own exclusive army based on pondered decisions. Creating a casual army and conjuring features randomly won’t benefit you in this title; everything needs to be carefully settled, else your performance in battle will be radically reduced and consequently easily overwhelmed by your opponent. Heroes of the Realm possess a progressive feature system, meaning you’ll unlock new functions as you gain experience though your journey, don’t undervalue the basic functions since all of them, minor and major, influence your evolution in battle. If you just started playing this game you might want to read Unigamesity’s review about it – you’ll be quickly familiarized with the game and understanding the army’s mechanisms won’t be problematic any longer.

Cards are the most elemental level of an army, recruiting synergic fighters is essential for the proper working of a HotR party. First you all, in order to have a balanced team you need to combine roles; selecting many heroes that possess the same role is surely a bad idea. Each role has its own efficiency and ineptitude, for example archers are excellent against casters and fighters however they’re very fragile against chargers and defenders. Unless you have a crystal ball, you have no way to predict your opponent’s army configuration, so the best choice is to create an equilibrated party that can cover every weakness. I suggest having at least one pure tank (defender), one melee damage dealer (fighter or charger) and three ranged characters (archer or caster) at the start. As you unlock more hero and star slots, you should keep this concept in mind, having usually a balanced ratio between attack and defense values. Combining elemental forces is a virtuous option as well, for example if your enemy is strong against water and you have many water cards, you’ll be in trouble.

One important thing to consider is the card’s tier displayed by stars, the more stars your card has, the stronger it is. But don’t get mislead, replacing a one star hero by a three stars hero isn’t always a good idea. You need to note your army’s synergy and horoscope compatibility. Each card influences the army’s performance – if you place two compatible cards near each other, their performance will be much greater than two higher tier cards that are not compatible with each other. Sometimes you should simply keep lower cards if they’re synergic. 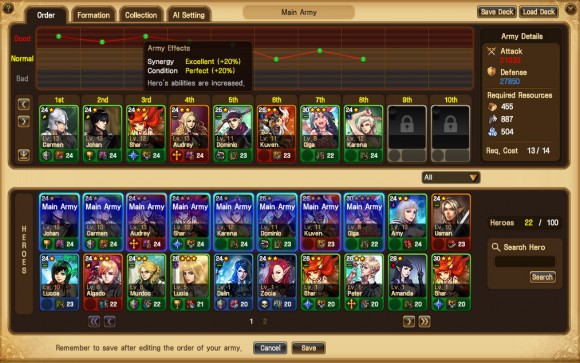 In HotR, heroes work as in a normal RPG, they have attributes, skills and equipment. You can make incredible creations out of the mainstream area too, since the system allows you to organize attribute points. Feel free to try new builds but keep in mind that inverting a card’s role won’t give you exactly the best result. The first step is to focus one or two attribute areas and boost them up every time you advance a level. Then, try to equip items that boost the same attributes, else you’ll be lessening your hero’s’ performance.

When socketing your gear, remember to check your champion’s elemental orientation, it’s worthless to boost fire when your hero is based on wind damage.

Formation allows you to distribute your heroes across the battlefield. There are mainly three formation panels: Arena, League and Rally Point. The first two are player versus player features; the second relates your army’s formation against environmental creatures. You should have different formations for each style but in this guide I won’t discuss PvP strategies.

The basic structure of battle is to position the higher defense heroes in the front barrier, to check your hero’s defense you should search for willpower and wisdom, the first is the physical protection rate and the second the magical protection levels. Defenders are normally the most suitable for the tanking mission; however, fighters and chargers can work as off tanks too. Just remember the ranged roles are very weak in defenses, so they should always be placed behind the melee classes.

In this game there’s many ways to boost your heroes and army’s powers. One of them is through your collection menu in the army’s panel. In there, you can view the available boosts for each rank, as well as the ones you have unlocked already. At early levels you can only apply one boost to your army, meaning you’ll need to choose wisely. I suggest a more general boost that can assist everyone, such as defense – intelligence works only for casters but willpower is fairly decent for any hero. 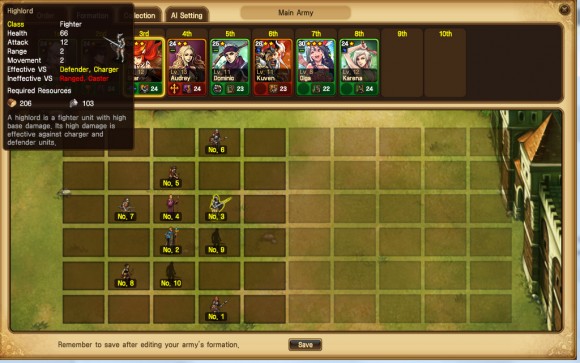 Mystic: Enchanting Your Army and Heroes

The Mystic is an enigmatic building that generates random buffs for your army and champions. You can then, apply and combine them as you wish. The boosts normally last one day and they can be purchased using gold or soul stones. The same technique described above should be functional here. For the army’s boost you should think about an attribute that is useful for everyone, defenses are the most optimal decision. On the other hand, when boosting a card, you need to verify the predominant attribute in order to maximize its potential, if you have a luck based archer, you should boost this area and not any other. 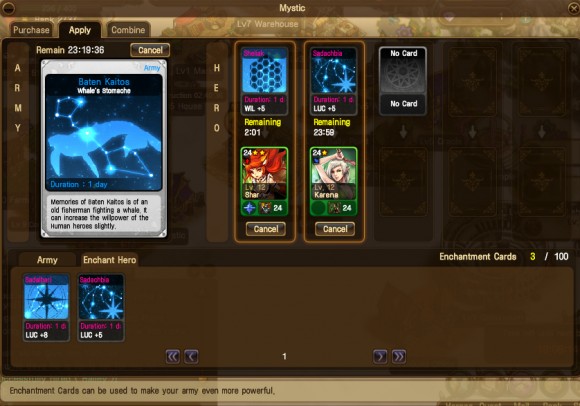