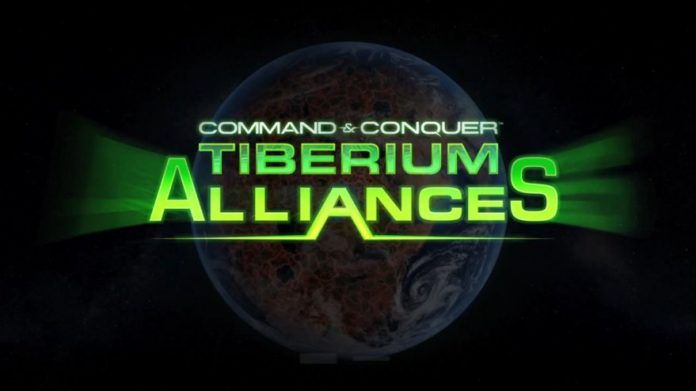 Based on the Command & Conquer series, the Tiberium Alliances online version features the eternal battle between the Global Defense Initiative (GDI) and the Brotherhood of Nod. In this massive virtual world created by EA Games, you must compete for survival at any costs – harvesting resources and developing a strategic plan will, most likely, be your best weapons in the ruthless journey of Tiberium Alliances. But the real question is: How to conquer your enemy and expand your dominance? This guide will provide you the answer towards prosperity.

As in every Command&Conquer game you have to construct a base and an army, to do so you mainly need resources and power. The green crystals, tiberium, are generally used for building and upgrading, the blue crystal are heavily needed to train units. Nevertheless, you’ll always need all the currencies in game for certain tasks. Research points and credits are essential to unlock new units and features, such as secondary bases.

The game’s core is about mineral, no surprise there. The wealthier you can get, the higher is your chance to conquer your adversary. Even though you need every single building at your disposal, you should always update your harvesters first – the more income you can get, the quicker you can update your base. This rule applies at any level but it’s more noticeable at lower levels, since you’ll only have one base and your force power isn’t strong enough to defeat most human opponents. To boost your production you should connect your resource buildings (Accumulator, Harvester, Power Plant, Refinery, Silo), they interact and buff each other if placed strategically.

You have three main sections of buildings, resource (mentioned above), defensive and offensive ones. The protective buildings will conjure your base’s defense, making it hard if not impossible to penetrate your core structures. While your base matches the first icon in your screen, the second icon is your defense map. This part of the base may seem worthless but do not underestimate it, if you don’t possess a strong defense barrier, your enemy will have a free path towards your core buildings. When this happens you’ll not only lose minerals, your base will get damaged too and in need for severe repair. The Defense HD and the Defense Facility are the central structures that allow you to raise a strong and extensive defensive force.

To build an offensive army, you’ll need to constantly upgrade the Command Center. This building increases the limit size of your army, however if you wish to boost your infantry or vehicles you’ll need to focus on other buildings like the Hand of Nod and the War Factory. Note that this field depends on your play style, if you do not possess air units, it’ll be useless to construct and update the Airport. 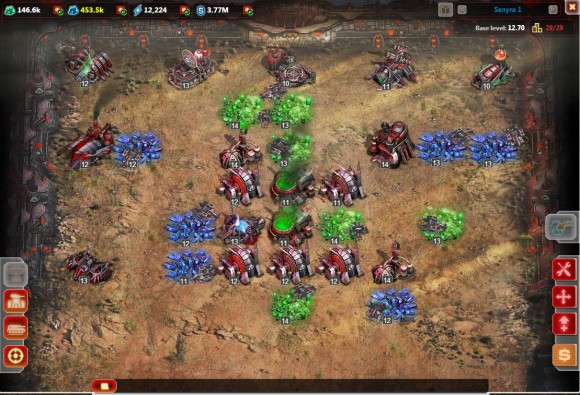 The Research panel has the same building section as defined above. Focusing in the offensive segment should be the best thing to do, more precisely unlocking units that can easily destroy buildings – bikes and aircrafts are the best at damaging structures. You should place them in the later waves at your formation panel. The first wave should be composed of heavy units that can sustain damage and be able to counter attack – vehicles and infantry are ideal to kill enemy units. Your main focus at early levels should be the accumulation of 2 million research points to unlock the secondary base option, it’s not easy to get so many points, so don’t waste them in units that may be not so helpful at the moment.

In Command&Conquer: Tiberium Alliances you can fight against The Forgotten, the environmental artificial intelligent force or you can challenge other human players. Defeating an enemy always means profit; however defeating a real enemy will increase drastically your reward chance. The higher your enemy is, the harder it is to achieve victory but if you do so, you’ll earn a much better prize compared to enemies around your level. Many high players have several bases and they do not keep good defenses for them all. If your target has low fortifications do not hesitate to attack; a fortune is ahead of you. To preview your enemy’s defenses and base you just need to click on the base’s icon and order to attack. If the target is too far away you can move your base, this is a very risky move but it can work if you’re fast enough. You can relocate your base every few hours so you can simply walk nearby, steal the minerals, possibly the whole base and then move away, if you’re not able to completely take it down. Why run away? It’s simple, if the player is higher, as soon as he logs in, you’ll be annihilated. If you’re far away, your enemy won’t know where you are and if he finds out, maybe he won’t be able to move close enough to attack you. Anyhow, before you move away make sure you’ve spent all your command points in battling your mark, because you won’t simply incapacitate your enemy for a long time, you’ll also get rewards every battle you manage to win.

If you don’t have any good human target in mind, simply attack forgotten camps and outposts, if they have a gold icon, it means there’s one building with a random special reward, once you destroy it you’ll get it in your inventory. 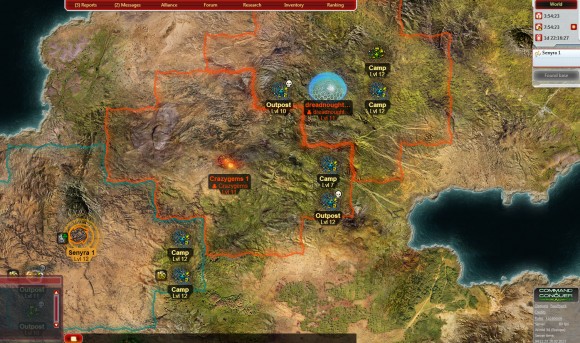 Defending your propriety is very crucial in this realm, if you fail to defeat an enemy’s attack, your buildings will get damaged and your resource harvesting will drop radically. You’ll need a lot of minerals to fully repair your base too, meaning your overall expansion and upgrading will be delayed and you surely won’t have enough currency to keep battling enemy forces. As obvious, the unit’s levels is the most important thing in the game, nonetheless there’s more. To create a steady barrier, you need to dispose your units around the map, it’s a large amount of terrain to fully cover and your unit limit is quite strict. Also, you don’t know which side of the map will be more attacked. I advise you to place one unit every two slots and whenever you build walls, put a firing unit behind it; walls are meant to delay your enemy, if you have no power force to destroy it, the enemy will penetrate your base anyway. 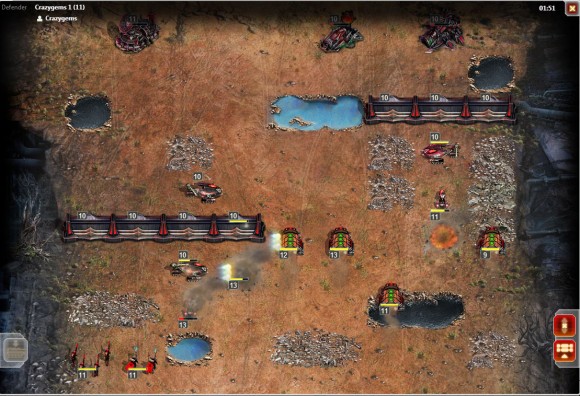 And these are our Command & Conquer: Tiberium Alliances tips and tricks. If you have some advice to share with us, do so in the comment section below!