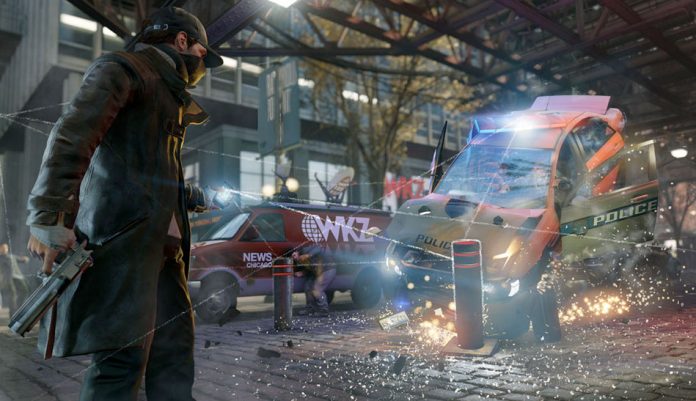 When you first commit a felony, it requires witnesses to report the crime in order for the search to start. The mini map identifies these threats as red triangles – the black border of the triangle fills up with red so show completion of the call and you’re aiming to resolve the situation before that border fills.

Depending on the specific crime will depends on how the witnesses react to you – firing a gun may alert someone who cannot see you, but heard the shot, effectively meaning you have a bigger area to deal with witnesses whereas a smaller crime like hitting someone as you park your car may only be reported by one person who happened to be looking as the crime was committed.

Obviously the key here is to deal with any witnesses as quickly and efficiently as you can, doing your best to avoid doing anything to create more witness phone calls. The most direct and effective way to deal with witnesses is to sprint towards them and press circle – forcing the witness to end their call. Alternatively you can shoot the witnesses as a desperate last resort – in an area with a low head count this is fine but for densely populated areas this will simply create more witness calls and create fresh problems. Once there are no longer any witness call threats remaining, you will have successfully dealt with the situation.

If you are unable to deal with all of the witness calls, the ctOS scan begins and we move onto the next phase of the process. The alert triangles do fill up quickly so dealing with multiple callers can be an issue – if at any point it becomes obvious that you won’t be able to deal with all callers before the triangles fill, start to leave the immediate area as quickly as possible ahead of the ctOS scan.

Essentially the scan is a generalized sweep to try and find you on the map so that police forces can be sent to pursue you. At this stage you will see yellow circles on the mini map. The outer circle indicates the total search area, the inner coloured circle indicated the area that is currently being searched. The smaller circle will begin in the center of the larger one and fill outwards – to avoid the ctOS scan you want to avoid all of these circles where possible keeping an eye on the mini map. These scan circles can also move dependent on the level of the crime and how much they want to find Aiden, keeping an eye on the mini map is absolutely essential for dodging these scans.

If you’re at this stage of the process, your best bet is to find a vehicle and drive away from the circles as quickly as possible, keeping an eye on the mini map to avoid areas where the circles move to. Facial recognition will pick you up if you are inside a scanned area, regardless of in a vehicle or not when out in public, so hiding in a car in a public area will not work to avoid these scans.

Aside from driving away and avoiding the scan circles, Aiden can also use the environment and hide to avoid the ctOS scans. The safest and most efficient way of doing this is to find a parking lot with its shutter door down, hack the shutter to open it up and then park inside, closing the shutter behind you. Pressing circle will have Aiden turn off the engine and hide inside the car – once this is done, it’s just a case of waiting for time to pass.

If none of the above worked, you will now find yourself being actively hunted by the authorities. Avoiding the police chase is very much the same as avoiding the ctOS scan, with a couple of added threats. The police officers themselves aren’t worth fighting unless you absolutely have to – where possible, remain in a vehicle and flee. Make the most of hacking traffic lights and steam pipes as you drive away – critical timing can wipe out the pursuers easy enough, although they’ll keep coming so this method alone isn’t enough to evade.

The best method for avoiding the police force is to initially hack/disrupt the helicopter. Although this needs to be done on foot, it’s simple to do and can be done very quickly before getting back into a vehicle. Simply leave your vehicle, face the helicopter and hold square to disrupt. Once you’ve hacked the helicopter this buys you a window to continue your escape.

With the helicopter decommissioned, all you need to do now is break the line of sight with the police officers and cars. Again, utilising hacking such as spikes, barriers and gates will help to keep the forces at bay. Once you’ve built up enough distance between you and the police, it’s a case of finding an enclosed spot to park up and hide in your car again, waiting for the forces to pass by or give up.

If the helicopter rights itself during this period and is back to tracking you, simply start this process again to disrupt the helicopter and try again. An alternative method to break the line of sight is to find an enclosed space such as a parking lot, use your free running abilities to escape and then find a parked car to hide in. While this method can also work, if you were followed into the structure it’s highly probable there will be an extensive search of the building which may find you.