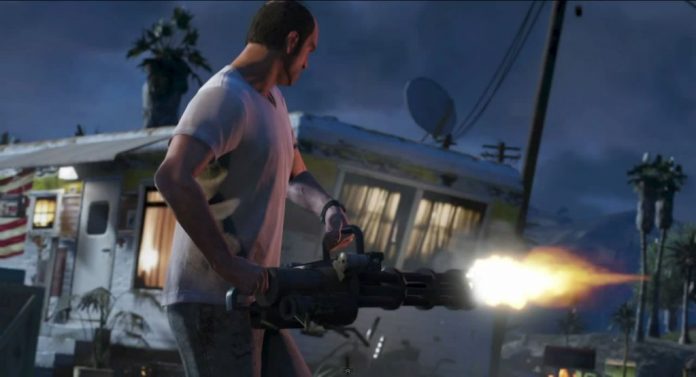 Trevor’s special ability in GTA V explains how he pisses so many people off but is still breathing. When Trevor gets angry there is very little that can stop him. It’s incredibly useful when battling biker gangs and Chinese gangsters, but there are a couple of other ways of using it that you might not have thought of.

Trevor is a total nutter and his special ability sees him become extremely angry, allowing him to dole out extra damage and take much, much more punishment than normal before succumbing to his wounds. He can refill his ability bar by being damaged, scoring head-shots, killing enemies and driving at high speeds. I wouldn’t advise intentionally trying to take damage, so if you’re not in combat but want a full ability bar at the ready then just drive around very fast. Once in combat you can try to focus on getting head-shots if you think you’re skilled enough, but it’s generally better to mow down a lot of enemies than worry about getting perfect shots on a couple. Remember that if you do get shot or fall down a steep incline Trevor will take a bit of damage and will get a little bit of juice added to his ability bar.

The main use for this is to soak up damage from bullets when in combat, either with the police or other enemies. It cannot be used while in a vehicle, so Trevor becomes much more vulnerable when driving around than while on foot. A good tactic is to use this ability when you still have most of your health. Your health will regenerate up to 50% if you get badly hurt but manage to avoid being shot for a little while. This means that the first 50% of your health is one use only – once it’s gone, it’s gone, unless you can find an ambulance or health pack. This makes it precious, so you should do your best to keep it for as long as possible.

Rage mode is best deployed when you have a lot of enemies around you and need to thin the pack. Don’t try to take on a ton of police in a car as Trevor. Instead, calmly get out, go completely insane and mow them down with the weapon of your choice. The mini-gun is best for taking out helicopters as there is no projectile drop like the grenade launcher and no projectile travel time like the RPG or the grenade launcher. If you don’t have the mini-gun unlocked then the shotguns works great for anyone nearby and the assault rifles are perfect for taking out the gunners in helicopters (and maybe the pilot if you’re very lucky/skilled). As with the other skills, try to keep half a bar of ability unused whenever possible, but feel free to use the whole bar if enemies are very close by – you can go from full health to dead in seconds if enemies score a head-shot or are using advanced weaponry. This ability is also handy in fist-fights, as it allows you to take anyone down in just one or two punches and absorb any damage doled out.

Rage mode can also be used to stop Trevor from getting killed by anything, full stop. If his special ability is turned on then he can survive being hit by a train and falling from buildings and mountains. You used to be able to activate rage mode in mid-air after leaping from a plane or helicopter, but that doesn’t seem to be possible anymore – at least not when wearing a parachute. While in rage mode explosions mean almost nothing to Trevor and, though he might get thrown about, Trevor will not be killed. As his ability can be triggered in mid-air (unless jumping from a plane or helicopter) it can be used if you find yourself base jumping without a parachute or when jumping out of a car. If you jump out of a car onto flat ground then the window in which you can turn on the ability before you hit the floor is so small as to be practically non-existent, so try driving vehicles over ramps and then jumping out in mid-air to give you plenty of time to activate rage mode before hitting the floor.

This ability is less complex than the other two, but just as fun. If you need to run between cars during a chase then make sure to activate rage mode for the sprint between vehicles. You will become vulnerable again as you open the door and get in, so make sure you drive away very quickly and put any enemies in your rear-view, as you are considerably less likely to be hit from behind than from the front when driving. This is a great ability for inner-city rampages when you can jump over fences and run through gardens to get away, but not quite so good out in the country where there is often little cover for when the ability bar is drained. Always try to be near cover or a vehicle when rage mode deactivates. Failing that, make sure that as many of your enemies are downed as possible to give you the best chance of escaping.