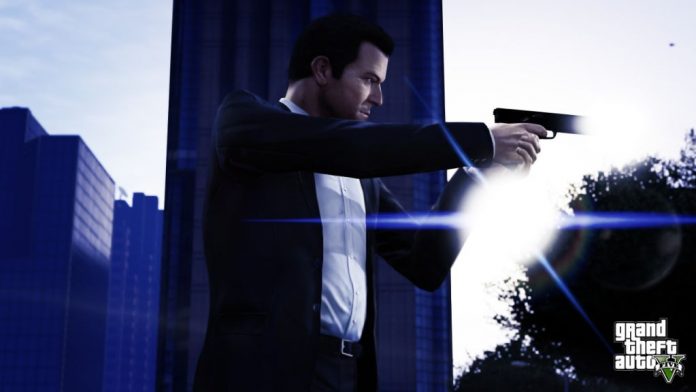 Michael’s special ability in GTA V seems pretty self-explanatory – slow down time, shoot dudes easier. However, there are a few things you can do to maximize its usefulness, giving you the edge over police, the FIB or whoever else Michael is taking his mid-life crisis out on.

Michael is the most professional of the three and has been involved in criminal activity for a long, long time. This means that he is a crack shot, and his special ability allows him to slow down time when on foot, mimicking Max Payne 3’s bullet-time. His ability bar can be refilled by scoring head-shots, stealth kills or driving at high speeds. Realistically you are unlikely to be performing many stealth kills while rampaging about town, so you’ll need to be really careful with how you place your shots if you want access to slow-motion. This means that shotguns and explosives are out of the question. You can use a sniper rifle to pop some enemies in the melon as they run towards you to build up your ability bar – this works especially well if you get behind cover on a rooftop. Stick to the first sniper rifle you get, as it has a faster firing rate and does enough damage to kill most enemies with a single shot wherever you hit them. Once your foes get too close the assault rifles and other automatic weapons are your best bet. Get behind cover, wait until there aren’t many enemies with a bead on you and then take the shot. Short, controlled bursts work a lot better than wildly firing like a mad-man. Pistols and SMG’s aren’t a bad choice once people get close. The fast driving is pretty self-explanatory – if you’re running from the police, put your foot down! If you don’t have much juice for slow-motion but know you’re about to get into a fight, there are worse things you can do than tear around the freeway for a minute to charge up.

Now you’ve got a full, glowing little yellow bar, how do you use it? My advice is to try not to use more than half of it unless you absolutely need to, so you always have some in reserve. It is at its most useful when there are a lot of enemies in the open with no nearby cover, as you can just calmly take head-shot after head-shot without having to wait for enemies noggins to pop back up. If you start firing using the ability but then realise there are no visible targets left, turn off slow motion and wait until you have a line of sight. It’s very important to conserve your ability as much as possible, especially in big fights with the police. For this reason you shouldn’t use either the normal or sawn-off shotgun – they have to be pumped between every shot and in slow motion that takes an eternity. If you insist on using a shotgun, go for the automatic version. In general its best to stick to automatic weapons with deep magazines – extended mags are a definite plus. The LMG’s are really the best as they won’t need to be reloaded, but you have to be careful to actually aim and not just hold down the trigger. If you want to assault your enemies head-on then try using a weapon with a bit less recoil and run towards them holding down RT/R2 – just make sure to head for cover in preparation for the bar running out. Another trick, if you don’t feel like being super accurate or are overwhelmed by a ton of enemies, is to go into slow mo and shoot everyone in the legs. This will knock them to the floor. They may carry on shooting you but it will give you a few vital seconds of breathing room to get the hell out of dodge.

Another less important but very entertaining use of slow-mo is to watch Michael fall down and off things. If you jump and then press B/O while in the air, Michael will dive forward head first. Just try going to the top of some stairs then diving face-first down them in slow-motion. It is hilarious.

As a rule, it’s not worth using explosives while in slow-mo as they are too fire or throw, unless you’re taking a lot of fire and need to take out a helicopter. On the subject of helicopters – use slow motion and the carbine or assault rifle to take out the pilot with a single shot to the head. Don’t forget to press the right stick in to get that little bit of extra zoom! If you’re feeling like a crack-shot then try the same with the sniper rifle. The same can be applied to approaching vehicles – get a headshot on the driver and most of the time the car will stop. Sometimes the passenger in a police car will chuck his buddy out of the door and take the wheel himself, so take them both out if you can. Finally, slow-motion is a great way of taking out tyres if the police start coming after you but you don’t want a three star wanted level – make sure to aim for the black of the tyre – if you just hit the wheel the tyre won’t burst.

Michael’s ability makes him very effective in on-foot combat but leaves him vulnerable when driving. Michael has the least starting strength of the three protagonists, so can’t take as much damage as Franklin and Trevor. For this reason it is very important that you take out anyone who might have a bead on you before you start getting into a car, otherwise you will take a lot of damage and possibly be killed. You can increase your strength by getting in fist-fights or playing sports like tennis to minimize this disadvantage. Play to Michael’s specific skill – shooting fools in the face – and you will have great success. Just be wary of getting in and out of vehicles and make sure to stay in cover!