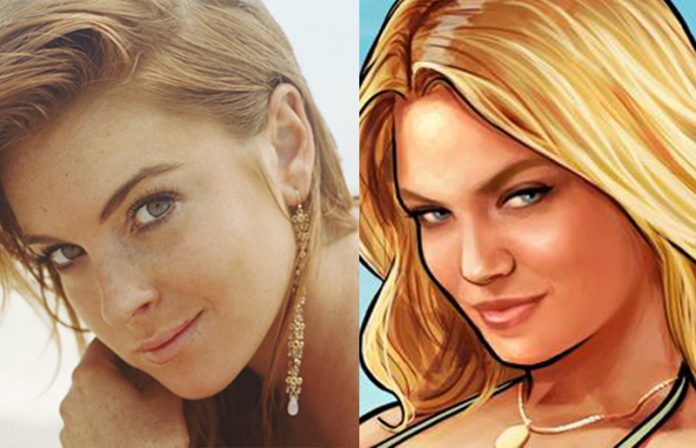 Lindsay Lohan is preparing an accusation against Rockstar Games because she believes that the company has used her image without her express permission. According to TMZ.com, the actress has three main evidence pieces to support her allegations. Now, this would be totally legit if her accusations were based on any kind of logical evidence but after analyzing each proof, I conclude that Lindsay Lohan either had access to some secret files proving her image involvement with certain GTA 5 characters or something must be really wrong. Let’s take a look at the evidence:

Evidence One: Lindsay believes that the blond woman holding a cellphone present in one of GTA 5 wallpapers was created based on her own appearance.

I’ve picked a summer beach picture from Lindsay and made a comparison, however I can’t find any significant resemblances. The eyebrows’ arch is quite different, the character’s eyes and nose are smaller and the mouth is bigger than Lindsay’s. There are a few similarities but the character definitely wasn’t created based on Lindsay’s appearance. Some players claim that this character looks way more like Kate Upton or Yvonne Strahovski as well. 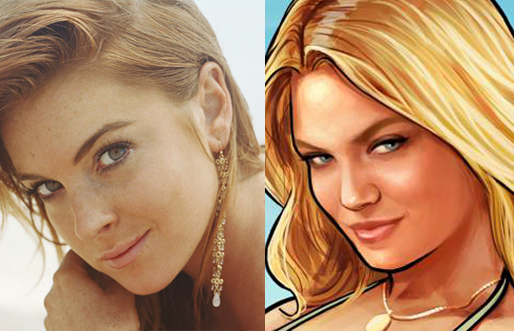 Evidence Two: The actress also thinks that a GTA 5 quest, where players must escort a famous blond celebrity, Lacey Jones, from a persistent paparazzi was based on a real life event that happened to herself in the past.

Well, i’m quite sure this kind of event has happened to basically every great celebrity out there. Besides, the in game images don’t reveal any major resemblances with Lindsay. Alright, she’s blond…  and? Too generic to be a concise accusation.

Evidence Three: The last evidence is about another quest, which is set at a hotel resembling the Chateau Marmont hotel in West Hollywood. The curious part is that Lindsay used to live at this place and still frequents it from time to time. The mission’s goal is to tape Poppy Mitchell with her boyfriend.

This one could be decisive for Lindsay but then again, it’s a famous hotel and she’s surely not the only celebrity that has lived or currently lives there. The female character in this mission is not even blond and she doesn’t look like Lindsay as you can see. The quality is not good enough to establish a comparison but from what I can see, this character has a bigger nose and a different lip shape.

Is this the price of fame? I can’t possibly see any kind of logic explanation behind her accusations (maybe there’s more into it than the press currently knows), however in the meanwhile all the spotlights are focused on Lindsay and that’s probably what she wanted from the start.