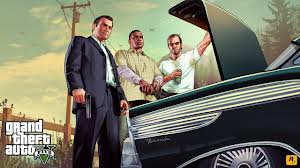 The Parent Trap and Mean Girls actress Lindsay Lohan has revealed that she is planning on suing Rockstar’s Grand Theft Auto V; claiming that the developer used her image without her consent or proper compensation. This is all according to a TMZ report, which claim’s that Lohan’s lawyer are prepping a lawsuit against Rockstar that will demand “serious money.”

While the official lawsuit hasn’t been filed yet, TMZ claims that the image Lohan refers to is the blonde woman holding a iFruit phone on the box cover of the game. Two missions are also being presented, one that features players taking home a Lohan-esque celebrity away form the paparazzi, and another that has players visiting Chateau Marmont in West Hollywood- a home that Lohan visits often and even has lived in.

This is the second lawsuit following rapper Daz Dillinger who accused the developer for using two of his songs in the game without permission. Dillinger demanded Rockstar to compensate him with more money or destroy all remaining unsold copies of the game.

Rockstar are no strangers to lawsuits, but the two involved with GTA V all resemble an obvious lust for a piece of the Grand Theft Auto V pie. The game has managed to generate over one billion dollars in sales in just three days. The game became the biggest selling, and biggest grossing piece of entertainment of all time.

Several game sites have reached out to Take Two and Rockstar for clarification regarding this news story.