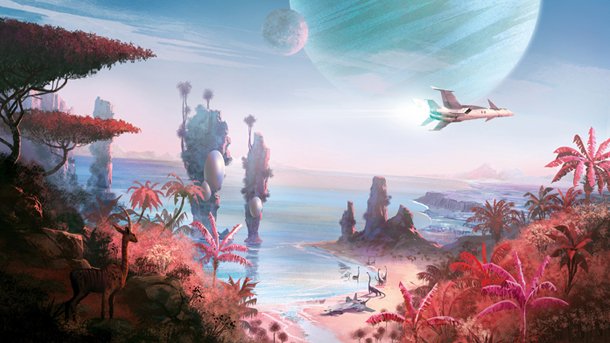 Have you ever dreamed about flying into the deep recesses of space, exploring the unexplored, and going where no man has gone before? I know I have, and although humanity is hundreds of years away from interstellar space travel, one game showcased at this year’s E3 probably will be the next best thing to actually owning a spaceship and flying into space: No Man’s Sky. The UK indie studio Hello Games (famous for the Joe Danger series), which is consisted of only six employees, is responsible for bringing this vision of a retro sci-fi fantasy inspired by the works of Isaac Asimov to life. It was just this past December when the studio’s workplace was flooded and destroyed most of their equipment.

However, Hello Games founder Sean Murray and his team were able to put their woes behind them to continue development and bring their project to the E3 show floor. Here are five reasons to look forward to a game that could very well bring a new renaissance in the gaming world.

1. The Limitlessness of Space

The universe of No Man’s Sky is seemingly infinite, and according to Murray, “No Man’s Sky is a game without limits.” Much like space itself, there are no boundaries or limits in the game and everything that the player sees in the distance is reachable. With randomly generated alien creatures, geological patterns, plant life, pirates and other space explorers it is difficult to comprehend just how big the finished game will end up becoming, so the wonder and curiosity of just what the player can find is exciting alone.

2. The Story is What You Make it

Want to be a captain of your own ship with the stars as your only guide? No Man’s Sky can let you do that. No experience is identical to another as the game places you on a random planet with a ship to take to the skies. The freedom of having no set goals lets players create their own unique play style. From finding parts to upgrade your ship for epic space battles to documenting new forms of life on foreign planets, the game is a blank canvas when it comes to narrative and that’s a good thing.

In the game, you can fly from planet to planet with no load times. Let me say that again: no load times. Yes you heard right, wherever you fly to in the game there will be nothing to take you out of the experience of traversing the galaxies. Compared to other space exploration games like Mass Effect where load times were necessary to load each new planet, No Man’s Sky plays without interruption.

The trailer released during E3 gave a small sample of what players can expect from the game, and part of what the game offers is intense first-person space battles with other ships. It is unclear if there will be an online multiplayer component in the final product, but just imagining a vast online community battling each other for control of the universe is a gaming dream come true.

As stated previously, developer Hello Games consists of just six people. Those six people are the masterminds behind the game, no big studio pressuring them for deadlines or to make changes to their product. Sean Murray’s vision of a game based on the classic science fiction stories of old makes this a game that no big studio could have ever made: a game by passionate lovers of sci-fi for lovers of sci-fi.

No Man’s Sky is set for a 2015 release date on PlayStation 4. No other platforms have been announced, but PS4 will get the game first on their platform.