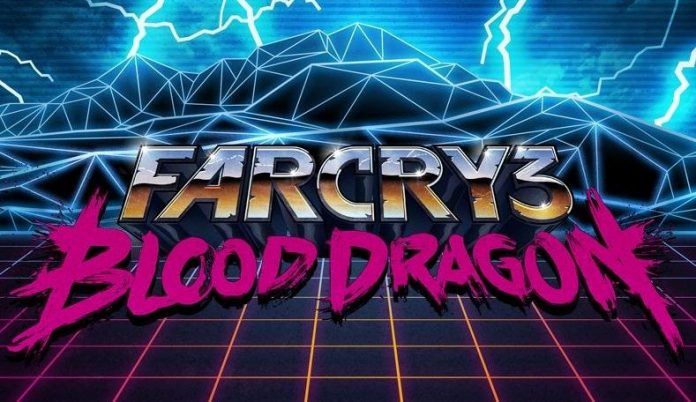 When Far Cry 3 was released, I instantly fell in love with the beautiful, sprawling open world, the copious amounts of things to do, and the story, more importantly the characters in the campaign which you see grow a develop within the harsh world they are thrown in. The main characters and villains were built up perfectly, especially Vaas, the main baddy who while doesn’t fit the normal bulking mass which bosses are portrayed as, still sent shivers down my spine. After finishing the game (including all the side quests, which takes up the vast majority of your play time) I was left craving more. So when DLC was announced I was immediately excited. However after more research I found out that this would be a stand-alone DLC with a completely new setting and characters, I was a little disheartened. Far Cry 3: Blood Dragon takes a completely different approach to the well-received game, but all in all is more than capable of standing on its own legs.

In Blood Dragon, developed by Ubisoft Montreal, you play as new lead SGT. Rex Power Colt, an American mk IV series Cyber Commando sent to investigate a rouge elite agent. As soon as Rex starts talking, you know he is a complete badass, almost as a direct parallel to Jason Brody in the original, who starts of as a meek warrior of circumstance. Rex has all the cheesy one liners, the attitude, and the abilities to boot. He is the ultimate assassin. Starting off with all the special takedowns from the first game, you instantly feel much stronger and much more able to dispatch Omega Corp, the main antagonists in the game. Replacing Brody’s knife you have a neon charged katana, a shuriken in place of throwing knives, and a D20 dice instead of the rocks used to distract enemies. Your standard weapons themselves are the standard pistol, sniper, assault rifle, and shotty combo, with the option of choosing a Bow or minigun later in the game (which I highly recommend you do). As you can probably tell by now, Blood Dragon does not take itself too seriously. In fact, the whole game is refreshingly funny, which is very different from the very serious tone of FC3. This new feel to the game is continued throughout, with Rex exclaiming how he hates tutorial screens, to the help screens themselves making fun of you and offering you ‘ad blocker premium’.

Blood Dragon, has you exploring an entirely new world which is set after a nuclear war which takes place in 2007. From the jump you instantly realise this is a very different game to the seriousness of the original Far Cry 3. Stunning Jungle and foliage are replaced with gritty dark browns and greys, but is still visually appealing in its own way. In this world, neon and lasers are the norm, which have the look and feel of old special effects from movies like TRON. Ubisoft themselves have described this as an ‘ 80’s VHS version of the future’ and this vision is fully achieved. Cut scenes are dealt with by 8/16 bit pictures in which the characters voice over, with some very funny and clunky animation which sets the tone perfectly. While I was a massive fan of the original, this new look was a very different, but nice way of playing the game.

In terms of gameplay, very little has changed. You can hunt the wildlife (and enemies) from the bushes, waiting for the perfect time to strike, stringing together multiple cool and swishy takedowns effortlessly. If that isn’t your style, you can go all guns blazing, which is made a lot easier in Blood Dragon with the almost over powered laser weapons at your disposal. Also fall damage has been removed (due to the shock absorbers in Rex’s legs) and you sprint and jump much higher and faster too. You also can dive underwater without the need for air, which can become very useful when trying to get the drop on an unsuspecting enemy.

The crafting system from FC3 is done away with, and in replacement weapons and power ups are gained via side missions such as capturing an enemy garrison, hunting special animals, or hostage missions known in game as ‘Save a Nerd’. These again a very similar to the side missions in the original and are a great distraction from the main quest. As well as these you can hunt cyborg versions of animals such as laser sharks, and the new additions of the blood dragons themselves, which are behemoths which will take more than their fair share of bullets. Blood dragons can also be used against your enemies by luring them to strong points and garrisons by throwing cyber heart which you obtain by ripping them straight out of your enemies lifeless bodies. This adds an extra element of strategy when planning a raid on a garrison, because if you use a dragon to attack the base, you then have to get rid of it.

The main campaign itself is solid with a lot of laughs and set pieces which are sure to keep you entertained, although it felt a little short for me, but this is probably because of the amount of time I ploughed into FC3. The dialogue is excellent with voice acting from members of the original terminator movies, and the script itself just adds to the overall cheesy wackiness of the entire game.

Overall, Far Cry 3: Blood Dragon is a refreshing take on one of the best games of recent years. It’s amazing that game developers are still willing to take such risky and creative risks. This game is unlike anything currently out there in terms of presentation, story and gameplay. More games should be made like this, which their focus on fun, not just realism. As stand-alone DLC this is definitely something I would recommend to not only fans of the series but also anyone who enjoys open world first person shooters who are looking for something a little less serious than the current line-up of moody stern faced modern shooters currently available. I would have liked it to be a little longer, but that’s probably because I had so much fun playing it.