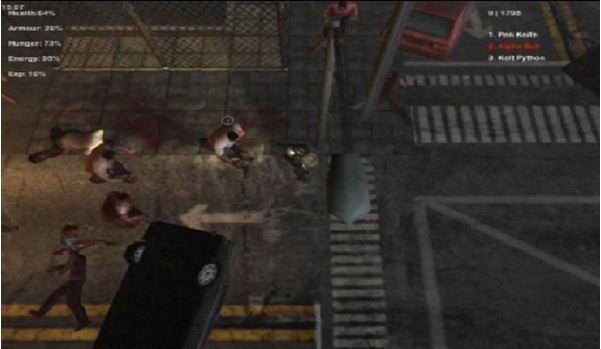 Do you want to play Dead Frontier? Oh, you don’t know? Well, in this review you will find out all the reasons why you should (or should not) give this post-apocalyptic game a try. So check it out!

What Is Dead Frontier?

First things first, what is Dead Frontier? Basically, it is a game set created by Creaky Corpse Games which sets players in a zombie apocalypse situation due to a drug company creating a drug that goes horribly wrong. Pretty cliche eh? Players are required to survive and fend for themselves as expected. Here’s actually where the good part begins.

Players are able to select from a large array of classes that supports different roles. These classes are categorized under production, service, stat-boost and role-play. The categorizing helps players easily decide which classes they want to play.

If you’re someone who enjoys supplying to the needs of others or basically selling off your products and or be a team player, then the production classes are the ones for you! These classes specialize in creating materials and items. Currently there are only two production classes namely, Farmers and Scientists.

Lets talk service, if you’re a player who enjoys acting as a mercenary though it isn’t all that cool as it sounds in Dead Frontier, the service classes are at your disposal! Currently there are three service classes namely, Engineers, Chefs and Doctors.

You aren’t any of the above? Well maybe you just enjoy beating up everything and being better than others. In that case, the Stat-boost Classes are the ones for you! These classes begin with bonuses statistics and will always be better than other classes of the same level. Needless to say, in the long run these classes are definitely better than the rest. However you’ll probably still have to depend on others for your survivability. Currently there are five stat-boost classes namely, Boxers, Soldiers, Police Officers, Firemen and Athletes.

Well what if I don’t want to be any of the above? Do I have any more choices? Yes definitely. Dead Frontier even supports role-playing classes! These classes probably just add life to the game. If everyone is a soldier or a scientist, where are the civilians right? They do however enjoy a bonus of 30% more experience. More so i’m guessing these classes are basically for advancing quicker than others but will be significantly weaker in the long run. Currently there are ten role-playing classes namely, Teachers, Priests, Lawyers, Accountants, Journalists, Actors, Stock Brokers, Architects, Entertainers and Students.

If the classes don’t intrigue your horror taste buds enough, the environments and music are set to make the game even more thrilling! While I can’t play music here I can show you what its like on the dark streets in Dead Frontier. Expect zombies, darkness and creepy environments. Well what do you expect when the world plunges into total chaos right? 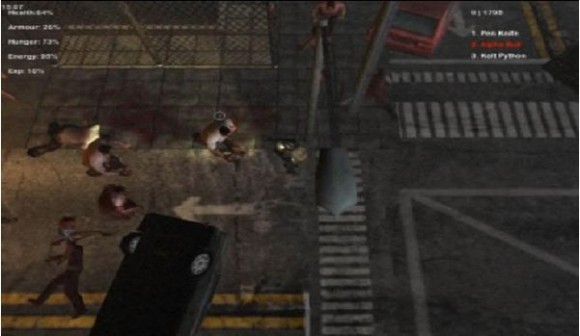 Armed with only a torch as your source of light, it definitely adds a touch of a fear factor into it. Whilst the graphics aren’t too stunning or beautiful, its pretty commendable for a browser game. The game also focuses a lot on realism, as you first enter the city to venture out on your new found chaotic journey, you’ll soon realize that every little action affects your end results. Loud guns such as shotguns or loud machinery such as chainsaws will attract more zombies to you. It’s not a huge feature but it really makes your decisions count.

Simplicity At Its Finest

Also the game is simple and easy to grab a hold of. Using the classic and famous WASD movement keys and various others for features such as inventory and to view the map, the game is basically made simple. You have one goal that many others are following, that is to survive. In which case it means having you load up on ammo and blasting whatever zombies or even players if you enable PVP to survive. Collect everything, food, ammunition, they all help out and are beneficial to one’s stockade. If you don’t need them, sell them. If you do, use them to get more! Simple enough and a favorable aspect in my opinion.

You’re probably wondering by now. What about gear, new guns and ammunition? Well since you’re given the choice of becoming a civilian then there’s probably no point having NPC’s anymore as you’re given the option to fulfill their roles. As such when it comes to gear, ammunition and food, players have to seek a market which is replenished, stocked and priced solely upon the provider in which case, another player. As such the money and loot that you earn should be carefully used or traded. This sure adds a lot more strategy in the game as it also makes players plan out and ration their money.

Every game has its own aspect and rate of growth. In Dead Frontier, the zombies grow along with you. As the game progresses, the frequency of zombies increases as well as their strength. It’s simple to tell when you notice their progressively mutated outlooks and gradual difficulty in defeating them. Though more often than not, you’ll be progressing at a steady rate enough to make the zombies you’re going to face a moderate challenge.

The diversity of zombies available are also of great numbers and makes the game interesting to play at all stages. Though earlier on it might get a little boring as the zombies players will engage in battle with are slow and rarely do they possess any special abilities. As it progresses however, a whole load of acid and mayhem will help fill the game with excitement!

In a zombie apocalypse situation, its safe to say, survival is key. It’s finally the one time in your life that taking the safe side is the best decision you’ll ever make. Unless of course, you plan to become a mindless brain eating zombie then you’re always welcome to run across the streets shooting nonsensically and attracting your soon-to-be new best friends.

Dead Frontier is interesting in its own way and definitely one of the better choices when it comes to a zombie apocalypse situation. Simple in its gameplay yet complex in strategy. Decisions lead to different outcomes, placing players in a real life simulation and takes the word survive to another level! In my opinion it is a great game and the only areas lacking would be graphics. It could be a little more player friendly by the addition of NPC shops that sell very basic necessities such as maybe the lowest grade of ammo. Also, be expected to die a lot when you first begin, it’s through trial and error (which you thankfully have) which helps players learn.

Cons – Rather shabby graphics, hard to grasp in early stages, no short cuts