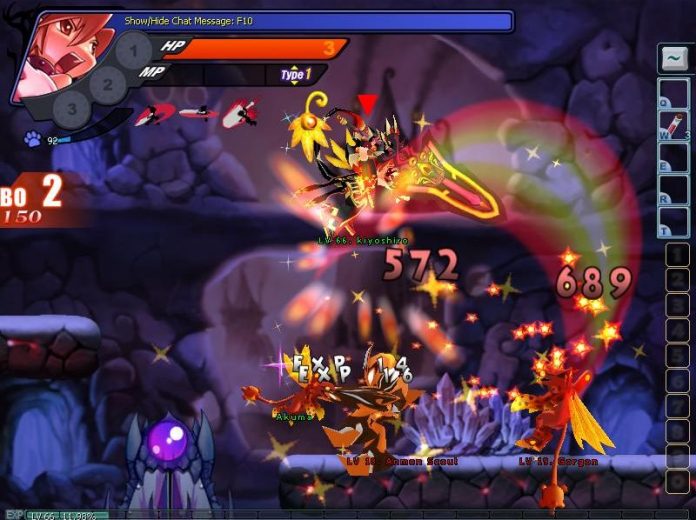 Grand Chase wasn’t what I expected. At all. It wasn’t bad by any means, make no mistake. I can only describe it as looking through a barrel labeled “apples” and finding a pineapple. It’s technically an “apple” but not what you expected to find.

I’m not new to side scroller MMO’s and I must admit this one was pretty well made. Graphics were lovely, sound quality was pretty good, and the few voices that were heard in the game clearly heard. Where things got a bit unusual for me was when I first installed the game. I began the tutorial and found out that you had to select a pre-made character to play with and not create and customize your own. Far from what I’m used to, but I thought it was a nice twist. I even took the liberty of reading the character bios on the Grand Chase wiki. Interesting stuff.

The controls were simple enough. The arrow keys are used for movement and the “Z” key is used for attacking enemies. There’s more to the controls yes, but I’m highlighting important basic function.
Gameplay, I admit was pretty good but honestly I didn’t quite like the starting point. From the get-go, the player has to choose between three female characters: an acclaimed knight, an elven archer, and a young mage. I began with the knight; since I couldn’t have a male character I wanted the most barbaric possible. Other characters (male and female) can be unlocked through the purchase and completion of the character’s mission from the shop.

Over all the game is very good and enjoyable. Be warned, the game is cute. Very cute. I almost quit playing because I thought I was insulting myself by participating, but a good friend (the one who recommended the game) asked me to press on. Glad I did, but honestly I may not go back. However, you can check out Grand Chase here.