There’s a minigame we can all play starting today in FarmVille, but just for a limited time: the FarmVille Mystery Game, a pop-the-balloons type of game that can reward us with a bunch of really rare and beautiful animals. If you’re curious to see what’s the new limited mystery game about and what prizes are there to be won, read on!

Let’s start with the beginning – what is the Mystery Game and how can you play it?

You can find the Mystery Game in the FarmVille Market – under the decorations tab – and, according to Zynga, it’s “better than a mystery box”! You will have to pop balloons in order to win mystery animals. Each throw costs 20 Farm Cash and all of the balloons contain exclusive, Limited Edition animals.

What makes the Mystery Game in FarmVille so specials? Well, unlike the regular Mystery Box, this new feature lets you choose the reward if you win it – however, it’s unclear here if winning it means winning a single throw (which costs 20 FV cash) or all the throws which would cost 180 FV Cash.. 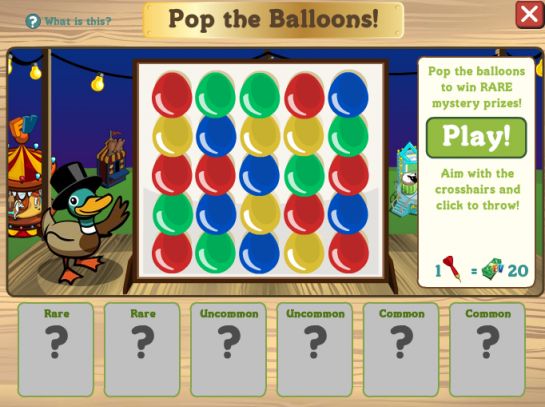 Either way, if you manage to pop them bloons as shown in the image above, you can win any of the following limited edition animals:

The Mystery Game is limited for 6 days only and probably if it will be successful, it will return next week with new animals. Will you be playing the Mystery Game in FarmVille?