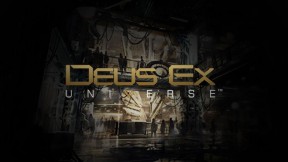 Eidos Montreal have announced Deus Ex Universe, an ambitious project that is aimed at providing interconnected games in the Deux Ex universe that will span across PCs, next-generation consoles, tablets, smartphones, books and graphic novels.

David also went on describing his studio’s future plans with the project, “It’s a commitment on our part to deliver meaningful content that expands the franchise on a regular basis and to deliver a deep conspiracy that will span several connected Deus Ex games, creating a more immersive and richer experience than ever before.”

Most of the team involved with production on Deus Ex: Human Revolution Director’s Cut have already started work on the next Deux Ex game,   “I’m pleased to confirm that we are already into production of the starting point for Deus Ex: Universe with a new game for PC and next-generation consoles. We’re very excited about it at the studio and I wanted to let you know that most of the team behind Deus Ex: Human Revolution is already working hard on this new game. It took us four years to learn how to create a unique Deus Ex experience with Human Revolution and it was important for me to keep this knowledge within the franchise.”

Daivd concluded by stating, once again, that this next Deux Ex title is planned for next generation consoles and that the game is still a long way off.