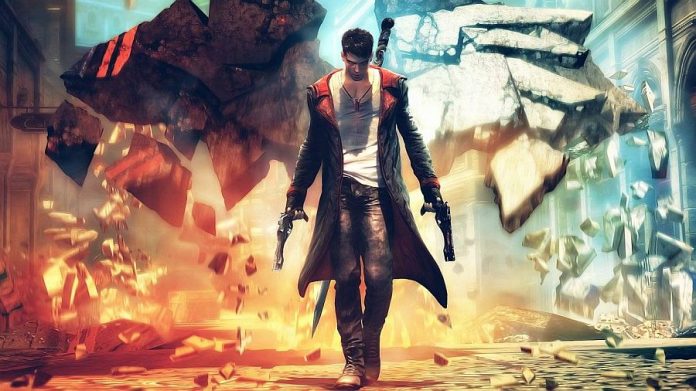 Today we continue our DMC Devil May Cry walkthrough with the guide to the second mission of the game – things get a lot more complicated here and I am sure you are happy you got to this walkthrough, as it will help you get past all the challenges. So let’s not waste any time and let’s check out below the DMC Devil May Cry: Walkthrough for mission 2!

After the first mission, the game triggers a cutscene and you earn an achievement. I would recommend on spending your upgrade points at the start of mission 2 and get new combos since it is vital to have some to defeat the enemies that you will encounter later on!

At the start of this second level in DMC: Devil May Cry, you are in an alternate dimension- just keep walking through the hallway until the small cutscene happens. Go upstairs and get to the other side just by jumping over the broken paths and then go through the door. Then another small cutscene happens and then a bunch of Lesser Stygian start to appear and try to attack you, finish them, after that a new enemy appears called The Death Knight and it tries to attack you, I would start shooting at it and then come up close and personal and do a bit of hack n slash, after you kill it, you will unlock your new weapon which looks very deadly and epic, its called the Arbiter and you will also unlock an achievement or trophy.

Another Death Knight appears and more Lesser Stygian, you will then learn how to use the new weapon and now with The Death Knights just attack them with the Arbiter and they will die easy.

After that flashback go up the stairs and proceed, once you reach the door that looks like it has lasers on it destroy it with The Arbiter and follow the path. You will then reach another fight with Lesser Stygian. Since I have the Arbiter now I would attack them with that because of the high damage it gives.

A small cutscene will then trigger showing a little bit of what Dante did in his childhood. Now you should be in a place where everything looks altered. Keep following the pathway, there will be some jumping involved in this section. After a little bit of jumping over to reach next platform you will get something called The Ophion Demon Pull which allows you to pull objects over to you. In this level you will need to use the Pull to pull a part of the platform to you.

Pull the platforms that are indicated on the screen and use them so you can get to the next platform.
Eventually you will reach a platform where enemies are, defeat them and continue. After that keep progressing until you reach a rock that looks like it has lasers on it and destroy it with The Arbiter.
Once you do that you will go back into the other alternate dimension you were first at.

Then you will see Dante’s Mum alerting his dad “they are here”. Follow her ghost and then the world should begin to collapse. You then see a new enemy called a Shielded Bathos, to defeat the Shielded Bathos use your pull and keep attacking it. When you’re done with that section, keep progressing until you reach the door that looks like it has lasers on it and keep on going. You will then reach a blue looking door. Turn to the left of that and a cutscene will trigger. After the cutscene enemies will appear and you need to finish them!

Once done, you get a weapon called The Osiris, it looks amazing. Then more enemies appear and you will be able to take them out easy with the new weapon. When you are done with them, keep going through the hallways until you get outside. Once outside proceed to the laser looking door and break it and then there will be a blue door you can now destroy that.

Keep on walking until you get to this library looking place and walk towards the blue rose. You now go back to the same place that you got your Pull ability. Walk towards the first platform and you will unlock the Ophion Angel Lift. The lift is kind of like a grapple hook so keep on grappling until you reach the first enemy. When the enemy is visible and in your sight, you can grapple on to him which is very useful.

Keep on grappling until you reach more enemies. Keep grappling and don’t worry if you fall down, you will just go back up. When you reach the end you must destroy the red rock and you will go back to the first alternate dimension.

When you get back, Shielded Bathos will try and attack you. Now that you have the grapple, grapple on to them and try and attack them – this will be much easier and it will be easier to kill them. Go out of the room and a cutscene will happen.

And this is my walkthrough for the second mission of DMC: Devil My Cray. I hope you enjoyed it and you will come back for more!

UPDATE: The walkthrough for mission 3 has been released, so go out there and enjoy it!