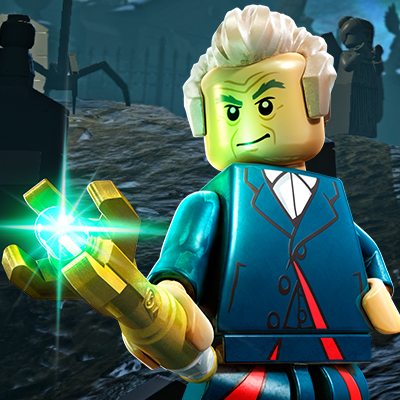 Warner Bros. Interactive has announced that LEGO Dimensions will feature the voice talents of the current cast of Doctor Who.

Peter Capaldi (the Twelfth Doctor), Jenna Coleman (Clara) and Michelle Gomez (Missy) will be lending their voices to their in-game LEGO counterparts.

A new trailer revealed a number of crossovers with the science-fiction favourite, as the TARDIS lands the Doctor in Gotham City and Hill Valley. We see the Time Lord interact with other legendary characters such as Gandalf, Batman, Homer Simpson and even Scooby and Shaggy amongst many others.

Doctor Who will be playable in the LEGO Dimensions Starter Pack, which will contain a themed level that sees your heroes battle Daleks, Cybermen and other enemies from the show.

There is a gameplay catch with this set; when Peter Capaldi’s Twelfth Doctor gets defeated in a level, his timeline resets and changes into William Hartnell’s original Doctor. As the character dies, he then regenerated into his other selves (including John Hurt’s War Doctor) until he reaches Peter Capaldi again, and the cycle continues.

Another gameplay feature is the TARDIS interior, which will change depending on which Doctor you currently control to their respective console rooms from the show. The interior can also be manually changed to choose which interior you like best. There will also be a jukebox inside the ship which allows you to choose from the different theme tunes from the shows history.

The second pack available to purchase in the Doctor Who Fun Pack, which will contain playable Cyberman and Dalek figures, which can be physically built and rebuilt twice for three different objects in-game.

You can view the LEGO Dimensions Doctor Who Trailer below.