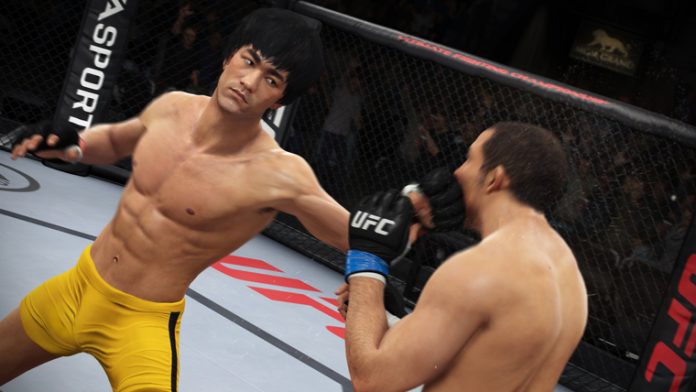 Bruce Lee is being added as a playable character in upcoming game EA Sports UFC.

The legendary martial artist will be available straight away for those who pre-order the game. He will also be available as an unlockable character when they complete the games career mode on pro difficultly or higher. The character will be usable across four weight categories: Flyweight, Bantamweight, Featherweight and Lightweight divisions.

In a blog post on EA’s website, Creative Director Brian Hayes explained the reasoning behind adding Lee to the games roster.

“I feel like this is the most ridiculous question.” He said. “Why put Bruce Lee in a UFC game? It’s. Bruce. Lee…

“You have the premier organization in the fastest growing sport in the world, the UFC; and the most iconic martial artist in the history of the world, Bruce Lee – a martial artist renowned for his philosophies that laid the groundwork for modern mixed martial arts. I can’t conceive of a universe where bringing these two things together doesn’t make sense.”

Art Director for the game Ian Lloyd said they got into contact with Bruce Lee Enterprises, who provided them with numerous digital references spanning Bruce Lee’s acting career, as well as behind the scenes shots. These were then used to pick the specific era they wanted to capture in the game and get the iconic details of his face and body.

Lloyd said: “A real bonus was the life-cast they sent us that gave us a truly definitive three-dimensional reference that would prove to be the next best thing to having Bruce scanned.

“This does not just look like Bruce Lee. It is Bruce Lee. The way he carries himself, his fighting stance, his rippling physique, devastating speed, signature strikes and accompanying yells, whoops and shrieks.

“We have summoned this pinnacle of human strength, speed and spirit into our world and it has truly been an honor and a career highlight for us to do so.”

EA Sports UFC will be released on the 17th June on Xbox One and PlayStation 4.

What are your thoughts on getting the chance to fight as Bruce Lee?