SEGA today announced the bonuses that fans would get if they preorder the upcoming Company of Heroes 2 from specific retailers.

Fans will get access to a second single player campaign titled “Theatre of War”. Following the story of the main campaign from a different perspective, Theatre of War will be released following the retail launch of Company of Heroes 2.

In terms of multiplayer content, players will also be given the Winter Ambush and Voronezh Front skins. These may be used to alter the appearance of player vehicles in online matches. 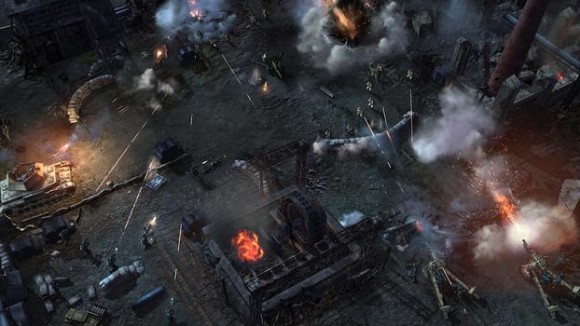 Those that preorder Company of Heroes 2 will also receive two military commanders, each unlocking different doctrines. The Germans will be able to activate the Joint Operations Doctrine to utilise precise artillery bombardments. Alternatively players can opt to use the Spearhead Doctrine to increase the power of their heavy armour and air support. The Russians will have the option of using flamethrower tanks  via the Anti-Infantry Doctrine, or can enable rapid reinforcement by activating the Conscript Support Tactics Doctrine.

Interestingly, so far there isn’t any details regarding retailer specific pre-order bonuses, a far cry from quite a few other AAA releases who spread their digital content exceedingly thin. Hopefully SEGA   keeps it this way, so that no matter where a player chooses to go for their pre-order, they’ll get all the bonus content.

Company of Heroes 2 will launch June 25, and is currently available for preorder on Steam. Alternatively you can head over to Greenmangaming, who will also give you access to the game’s beta while their stocks last.