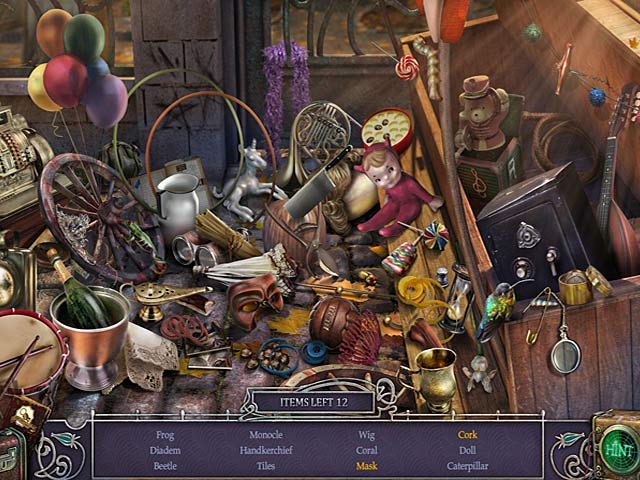 With 2012 almost behind us and no Mayan apocalypse to scare us again, it’s time to check out the best Hidden Object games that we have played throughout 2012 and, in case you missed one of these game, enjoy playing them because… well, we consider them must play titles! So without further ado and in no particular order, let’s see below the best hidden object games of 2012!

The Agency of Anomalies: The Last Performance

Take on the task of exposing a secret brotherhood called The Seekers and save the performers of the theatre who became the brotherhood’s victims in The Agency of Anomalies: The Last Performance. As an agent of The Agency of Anomalies, help the performers restore their human form, return their paranormal powers and find out what happened to the theatre’s founder Patrizia Edelshtain. Get the game here.

Help Sam Wilde rescue his love Anna in Brink of Consciousness: Dorian Gray Syndrome, an incredible Hidden Object Puzzle Adventure game! Sams every move is being tracked so he has to be extra careful. Putting his journalistic talents to the test, Sam must find the maniac who has kidnapped Anna, and stop him before its too late. Explore gorgeous locations and solve tricky puzzles in Brink of Consciousness: Dorian Gray Syndrome! Check out the game here.

Royal Detective: The Lord of Statues

You have been summoned to save the alpine village of Martlet in Royal Detective: Lord of Statues. Martlet has been taken over by statues! What made these statues come alive, and how can you stop them from destroying Martlet? The answer lays in the story of Princess, a young girl who was left on the statue makers doorstep at birth. Find out who enchanted the statues and why in this charming game set in a small European town. You can find the game over at Big Fish Games.

Travel from the deepest trenches of the Atlantic Ocean to the awe-inspiring wonders of Mars as you solve the greatest archeological puzzle known to man: the origin of Atlantis. Through stunning production values and cunningly designed puzzles, Eternal Journey: New Atlantis will draw you into an experience unlike any other hidden object adventure. Click here to find out more about this game.

After being invited to the Christening of your sisters son, you arrive to find a deserted estate in Grim Tales: The Legacy! After getting married to the love of her life, it seems like a happy ending is right around the corner for your sister. However, all is not well. The sounds of ravenous beasts echo through the halls of the once great estate and your sister is missing! Use your Hidden Object talents to track down her family and save them in Grim Tales: The Legacy! Check out the game here.

Awakening: The Skyward Castle tells the tale of young Princess Sophia, who awakens from a magical century-long slumber into a land threatened by an ancient evil. Braving the dangers of an unfamiliar world, Princess Sophia has traveled far to discover the fate of her exiled kingdom. Having no magic of her own in a land built with living magic, she must overcome the many foes, perils and obstacles with her wit, skill and allies. Can Princess Sophia lift the curse that plagues her people? Find out in this epic conclusion! Check out the game here.

Enigmatis: The Ghosts of Maple Creek

Find a kidnapped teenage girl and save yourself in Enigmatis: The Ghosts of Maple Creek, a fun Hidden Object Puzzle Adventure game! After waking up in a tiny town in the middle of nowhere, you must piece together your memories and figure out why you ended up in Maple Creek. Discover the ancient evil that lurks in the seemingly peaceful lands of Vermont and learn the truth in this thrilling detective story! Head over to Big Fish Games to get this game.

Be careful what you wish for… When her young son begins to wither and age before her eyes, your sister desperately requests your help. You arrive to discover that a deadly bargain has been made. You must set things right before your nephew pays the terrible price in Grim Tales: The Wishes! Find out more about this game by following this link to Big Fish Games.

You’re drawn into a web of deceit when your train stops in Andville, where the Black Widow lies in wait. Follow a trail of clues and dead husbands as you explore this once picturesque town now at the mercy of the Black Widow and her mechanical minions. What drives her lust for revenge? Where is the root of her strange power? Uncover the bizarre history – and mystery – of this little town. And track down the Black Widow in time to foil her devious plot for revenge! Check out the game here

Mysteries of the Mind: Coma

Everyone deserves a second chance. You’ve been in an accident and are fighting your way out of a coma. Inside your mind, you must explore your deepest memories in order to right the past and set yourself free. First you’ll go back to visit your mother, with whom you were estranged before she died. Now’s your chance to uncover the mystery of your rift and show her what she meant to you. Explore nostalgic locations and meet other people from your past in this moving, dramatic hidden-object puzzle adventure game. There’s also a guiding spirit whose true identity is yours to uncover. What happened all those years ago when your family was changed forever? The thing that really keeps you trapped might surprise you. Click here to check out the game.

After Awakening in a mysterious castle it’s up to you to collect clues and valuable items needed to solve perplexing puzzles and escape! Listen to your fairy friend as she guides you towards the exit. Play fun minigames and solve clever locks to make it to the next room in the castle. Use your Hidden Object skills to search for the next hint and discover a young Princess’ destiny in Awakening: The Dreamless Castle. Find out more about this game over at Big Fish Games.

How far will you go to save your only daughter’s life? Is there a limit? Help Owen Wright rescue his daughter from the clutches of the Lonely Hearts Killer, the mysterious figure who kidnaps and murders people who have suffered a love gone wrong. Unravel the intrigue, put a stop to the whirlwind of crime that has paralyzed this late 19th century British city. Olivia must live! The killer must be brought to justice! Only you can do it! Find out more about the game here.

Climb aboard an ancient Spanish galleon lost in time as a Coast Guard officer tracking an elusive criminal in Mayan Prophecies: Ship of Spirits. As you explore the vastness of a ship lost in time, what mysteries will you uncover amidst its Mayan idols, menacing sea creatures, and exotic treasures? Find out in this exciting new Hidden Object Puzzle Adventure game on the open seas! Click here to get the game.

Search for thousands of cleverly hidden items around the historic sites of jolly old London in Big City Adventure: London Classic! Collect postcards containing fascinating and obscure facts about London and its history and earn cool mementos from the amazing scenes you’ll visit in this fun Hidden Object game. Play unique minigames and explore a beautiful city in Big City Adventure: London Classic! Head over to Big Fish Games to find out more about this game.

Thumbelina had the perfect happy ending, until the Raven Queen crashed her wedding, kidnapping her prince. To make matters worse, the Raven Queen locked her up in a dungeon! Will she be able to escape and rescue her prince before he becomes the Raven King? When you’re only a few inches tall, you need all the allies you can get, but beware! Anyone you meet could be a spy working for the Queen! Join Thumbelina as she journeys across the fantastic Kingdom of the Floral Elves in Unfinished Tales: Illicit Love, a charming hidden-object puzzle adventure game! Get the game here.

And these are the top hidden object games of 2012! Let us know which of these great games is your favourite!