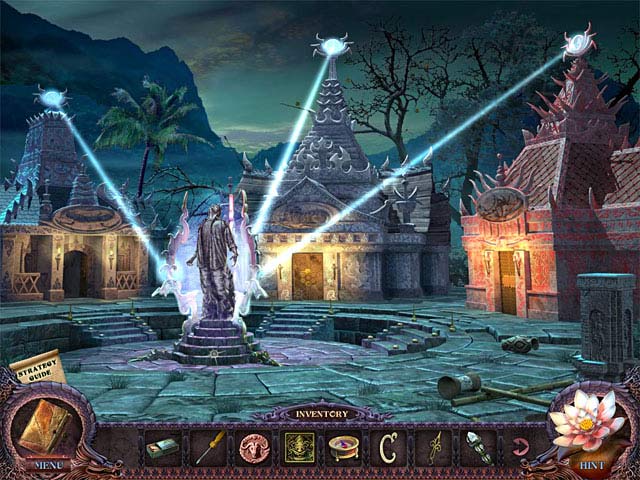 It’s time to check out the best casual games released in May 2012 over at Big Fish Games and make sure that you play all these top titles in case you haven’t done so already. As always, I did my best to keep the genres of the games as varied as possible but once again the hidden object genre was the one that had the most quality releases this month so for those who love this type of games, there are some really solid titles here. Just check out the details below and see which were the top casual games released in May 2012.

Secrets of the Dark: Eclipse Mountain
Save your friend from the Demon of Darkness in Secrets of the Dark: Eclipse Mountain! Follow clues left by stone monks in a deserted town in Thailand to uncover a thrilling mystery. Battle the dark and magical werecreatures that want to sacrifice your friend in this macabre hidden object puzzle adventure game! Click here to find out more about the game.

Puppetshow: Return to Joyville
Travel back in time to help stop a terrible fire that started Felicia down her destructive path in Puppetshow: Return to Joyville! This time traveling adventure takes you back to Joyville when Felicia was a small child. With the help of Felicia, try to stop the fire that incinerated her father’s theater. This fire horribly burned Felicia, and caused her to turn evil. By changing the past, Felicia hopes for a chance at redemption. Discover who the true villain is in this captivating adventure! Click here to play the game.

New Yankee in King Arthur’s Court
New Yankee in King Arthur’s Court combines nail-biting time management thrills with the ease-of-play casual gamers enjoy! When a bolt of lightning sends you back to the days of King Arthur, you trade in your farmer’s hat for a suit of armor and set off on a journey to find the Fountain of Youth! To complete your mission, you’ll need to gather resources, build thriving settlements and fight off monsters! Are you ready to begin your quest? Click here for more details.

Spirits of Mystery: Song of the Phoenix
Reunite the Dragon and Phoenix Kingdoms in Spirits of Mystery: Song of the Phoenix. The Kingdoms of Dragon and Phoenix have been warring with each other for over 300 years. The Princess of the Dragon kingdom was set to wed the Prince of the Phoenix Kingdom in order to bring an end to the conflict but the Prince has been kidnapped! An evil witch, trapped in stone hundreds of years ago, orchestrated the abduction of the Prince. If the two Kingdoms cannot form a truce through matrimony, then the witch will break free from her prison. Help the Princess locate her missing groom and unite the two Kingdoms in this captivating Hidden Object game! Find out more here.

Nightmares from the Deep: The Cursed Heart
Dive into an epic journey as a museum owner in pursuit of an undead pirate who has kidnapped your daughter in Nightmares from the Deep: The Cursed Heart! You quickly realize that the undead pirate is entangled in a tragic, centuries-old love story, and wants to resurrect his mistress with the youth’s life force. You must act quickly to save the young girl’s life before it is too late. Travel through haunting seas, ruined fortresses, and bone covered catacombs as you uncover secrets from the past! More details here.

Final Cut: Death on the Silver Screen
Unravel the mystery of your father’s death and brother’s bizarre disappearance in Final Cut: Death on the Silver Screen! Your father was a famous movie director who liked to invent elaborate locks and devices. A mysterious villain demands you track down the pieces to his greatest – and perhaps most deadly – invention of all time! If you don’t, your brother will suffer the same fate as your father. Find out more here.

Burger Bustle: Ellie’s Organics
Help Ellie get ahead in the restaurant business in Burger Bustle: Ellie’s Organics! Tired of watching her boss, Mr. Gristleman, serve unhealthy food to customers just to make a buck, Ellie has decided to open her own chain of organic burger restaurants all over the world. Now she must work her way up the restaurant ladder by serving great food and drinks while keeping customers happy and healthy. Help Ellie defeat the greedy Mr. Gristleman and prove to the world that healthy food can be fun and delicious in this exciting time management game! Play the game here.

The Bluecoats: North vs South
In The Bluecoats: North vs South you play as the head of one of the armies of the Civil War. Your aim is to conquer the American territory. Head up the Yankees or Confederates and destroy your enemy! Taking up positions, capturing states, assaulting and capturing enemy forts, attacking trains and protecting your railroads… you’ll have to deal with everything! Click here to find out more about this game.

Hopefully you will find at least one favorite game in this list of top titles released in May 2012!