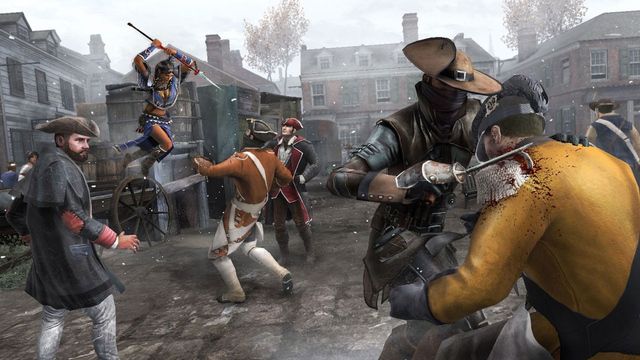 Assassin’s Creed 3 will be released with a very interesting co-op mode, the Wolf Pack. Initially, when I heard the name I though ‘Oh, no, NOT vampires!’ thinking about the Twilight Saga movie, but fortunately Ubisoft didn’t go completely crazy. On the contrary!

They have designed this Wolf Pack mode which sounds extremely impressive right now and completely improvable: you will join co-op matches together with other players, and you will be the wolf pack in Assassin’s Creed 3. You will find yourself in a city filled with NPCs and the game will assign your team one character to assassinate. You have a time limit to do so and if you succeed, you will continue with a new target and so on.

But this is not where the fun stops and this time you really won’t be able to blast your way in and kill everybody in sight: if you make too much noise or you decide to go gung-ho on your future victims, they might flee (together with any companions they might have) and even hide in their rooms, closing the doors and making it impossible for you and your wolf pack to kill them. And even if you manage to do it, since you have alerted the entire city with your behavior, your next target will be impossible to be killed. Which is pretty smart and makes team play and stealth a really important part of this mode.

There will be, of course, different ways to annihilate your targets in Assassin’s Creed Wolf Pack: you will have poisoned darts, and other similar ways that will offer an added bonus points stack for the kill.

So all in all, this new game mode revealed by Ubisoft for their upcoming game is really interesting and opens up the door for many new possible game modes, including a similar one where we’d all be both victims and hunters. Now that would be something amazing to see!