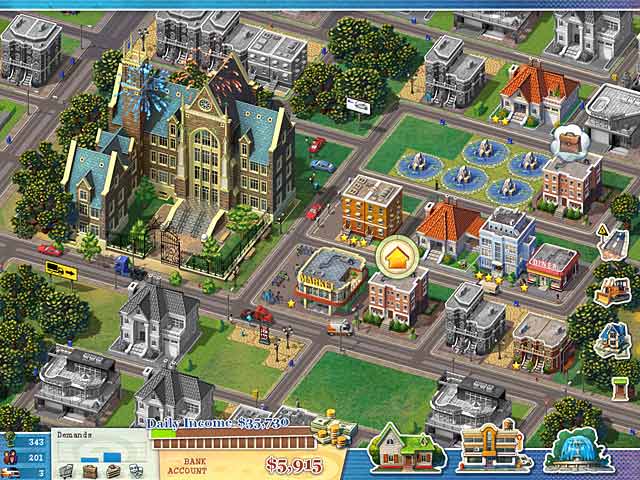 Every now and then, out of nowhere, appears a city building game that blows you out of your socks and Be Richest, a game available over at Big Fish Games might be that title.

A city is left in ruin at the hands of a corrupt official, and you have been called in to rebuild it in this exciting new installment of the Be Rich franchise! Build and restore homes and businesses, keep residents safe and happy, and bring the city’s crooked former mayor to justice as you develop your own business empire. Find out if you have what it takes to Be Richest!

And it all is just as good as it sounds: the game is fast paced and you will never get bored (actually, it will become really challenging in the later stages) and its visuals are top notch as you can see in the screenshot above (click to enlarge for a better view).

However, there’s not all sugar and honey with Be Richest! and even though the problems are no game breakers, they are present: the User Interface is the main problem here, especially if you got used with previous games: you can end up upgrading or demolishing buildings without wanting because of the fast clicking that you’ll be doing every now and then, but maybe we can consider it a part of the overall challenge.

Because, all in all, Be Richest! is a really nice city building game that’s perfect for those who fancy a time management game in their free time. So head over to Big Fish Games and give Be Richest! a try.