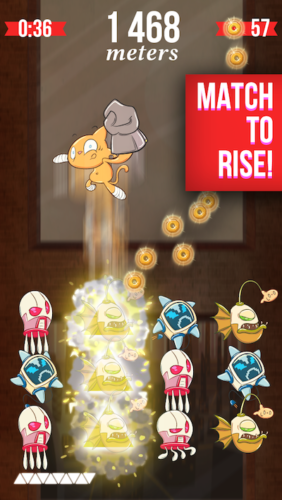 ArtBit Games announced today the release of ZEZ, an action puzzle game for iOS. This title has a very peculiar visuals which combine cartoon and vector graphics. Playing this puzzle is simple, but as players progress strategy will surely be required. The company explained that ZEZ is a versatile game apt to satisfy casual and hardcore gamers:

Playing is simple: you line up same colored robots, smash them and rise as high as you can until the time runs out. Collect parts to unlock awesome features and new rocket fists for ZEZ. ZEZ was 16 months in development by a team of two people focused on delivering the ultimate casual game with enough depth too keep hardcore players hooked. The time may be limited, but there’s no limit to how high you can reach and how fast you can play.

ZEZ is simple to player but extremely hard to master and it allows players to customize their characters. Each match lasts 60 seconds and players can use combos and tactics to overcome each challenge.