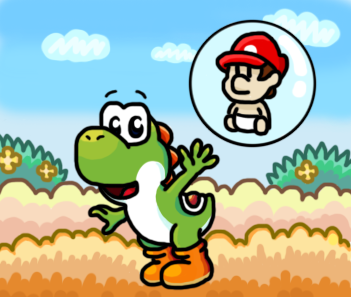 In this morning’s Nintendo Direct the company confirmed the release window for Yoshi’s New Island. The 3DS title will hit store shelves sometime in Spring 2014. The company also confirmed that the original game’s creative director, Takashi Tezuka, will work on the new game as producer. The game was announced back in April. The last title in the series came out in 2006, for the DS.

This new game will carry on the core game play mechanics from the series; there’ll be the same flutter jumps, egg-throwing, and ground punds but will also feature  new 3DS gyroscope features. The game, visually, hearkens back to the old SNES days with a nod to retro style visual aesthetics.

The title also received a short story trailer that can be viewed here.