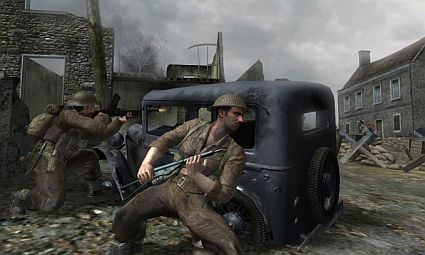 From the late 1990s until around 2008, the video game industry was fixated on World War II. Medal of Honor and Call of Duty both began and achieved success with games about WWII, and EA released several spinoff Battlefield games set during that war.

But now, developers steer clear of the battlefields of Nazi Germany or Imperial Japan. Arguably the most recent AAA first-person shooter to take place in the Second World War is Call of Duty: World at War, and that game has now seen five and a half years, five more Call of Duty games, and a next-gen console launch pass by.

It’s clear why no more have been made. Such a high saturation of games caused players to burn out on the stories that could be told. Each subsequent WWII FPS became a clone of the last. A Thompson submachine gun in Medal of Honor felt exactly the same as one in Call of Duty, and the German and Japanese opponents had very little variation. Sales went down, and developers were forced to move to new battlegrounds.

Now, however, those old WWII battlegrounds have been forgotten. They have faded from the minds of the gamers, who instead are consumed by sci-fi shooter after sci-fi shooter. The next year is filled with dystopian near-futures or distant star-exploring fantasies: Watch Dogs, Destiny, Infamous: Second Son, Titanfall, and presumably the next Call of Duty. But none explore history.

The next few years will be the perfect time to launch a World War II FPS. Heavily flooded with sci-fi, the players will look for anything different or unique. Something familiar, but not recently explored, is the optimal material for a new and exciting shooter.

Hopefully, however, this new WWII shooter will not be a clone. The PS4 and Xbox One open a wealth of possibilities for a developer. Perhaps we will see the appearance of a story-based WWII journey, or a game in which the player has agency and can send the world into an alternate-future tailspin.

Imagine the impact that the D-Day invasion would have if the graphics were truly next-gen. The player would take control of a new recruit, and stepping off of the landing boat, he would be confronted with the enormity of the chaos of the Normandy invasion. Past attempts at representing this event in game have been ineffective; the sound of bullets seemed empty when the rounds didn’t kick up sand where they hit the beach, artillery shells were cartoonish when all they left were blackened spots, and soldiers never seemed to act realistically like soldiers under duress should. But now, developers have the power to recreate the battle. This is more than just to achieve photorealism, though. They have the power to make a point with the invasion. The fight can be more than just a shooting gallery: it can convey pressure and tension, and make the player nervous as they have to fight for survival.

Patrols of towns could be as suspenseful as the fights with Clickers were in the Last of Us. Each time a unit enters a town, the player knows there could be enemy soldiers around any corner. But the enemy has the advantage. Bombed-out churches become machine gun nests, steeples become sniper towers, and the infamous hedgerows of Normandy become a force to be respected.

A developer could make a house inspection into a strategic and valuable puzzle. Tasked with clearing out the enemies holed up within, the player could enter the building with their unit and listen and look for the signs of the enemy. A creaking floorboard, a pantry devoid of food. A whispered phrase in German. And when they are located, it becomes the player’s responsibility to deal with the threat. For example, the squad could storm the room guns blazing. Or, the player could try to lob a grenade in through a window. C4 could even be placed on the supports below the room to blow out the floor. Destructible environments could create a rapidly changing battleground that requires a tactical response.

All of this could be combined to make a World War II game like none before it. But a game is more than just the gameplay, and so a developer could also apply modern storytelling techniques to it. Old Medal of Honor and Call of Duty games featured protagonists who seemed superhuman and had tangible influences on the entire war. A new game could focus instead on the life and survival of the squad, making the fate of the player’s squadmates the entire motivation of the fight. A story becomes significantly more effective the more relatable it is, and the best way to achieve this is through shrinking the scope of the story, and making it human.

These are all modern concepts. They generally came into widespread use after the decline of the WWII shooter, and so no game has yet to demonstrate the possibility of a war story told via game using these new techniques. Therefore, I believe it is time to try again. The war can be a setpiece, and not a focus. The use of high-powered hardware can create a World War II more believable and effective than ever before.

But most importantly, the war can help tell a powerful and moving story. The reality of a huge conflict like WWII brings about unique emotional changes that can motivate a person in challenging and interesting ways. These changes have rarely been explored because the focus has always been on a protagonist who can save the world. However, storytelling has progressed. Now, a developer can make a concentrated story about a person’s everyday struggle for survival. And it is in this type of story that the literary value of video games is created. World War II is still a singular event in human history, and no other time period can capture its effect on the people who fought it. It is time for players to experience the war again, now for understanding and thematic meaning as much as for entertainment.