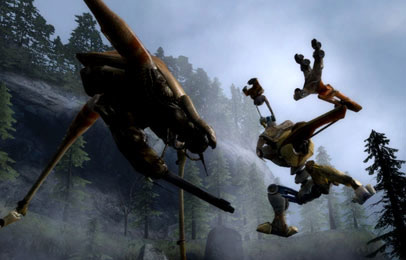 UPDATE: ValveTime has reported that the file trademarks for Half-Life 3 were a hoax and now have been removed.

“We can now confirm that the “Half-Life 3” trademark has been removed from the Trademakrs and Design Registeration Office of the European Union (OHIM) website. The entrant appears to have disappeared entirely after only being listed on the website database for little over a week, allowing us to identify that the trademark’s listing was more than likely a hoax intended to generate fake buzz for a game which is unlikely to appear for several years. Returning readers may remember when we had discussed how the “Half-Life 3” listing was previously never officially checked or authenticated before its removal.

On October 2nd 2013, a brand new trademark filing appeared on the same site, this time for Portal 3″, which is listed under the trademark number of “012190286”. While this new filing should almost definitely be taken with a rather large pinch of salt, we can confirm that the “Portal 3” listing appears to have been appropriately examined by OHIM, unlike the previously listed “Half-Life 3” trademark. Thanks to the recent sneak peak into Valve’s Jira account, we can confirm that there is currently no “Portal 3″ development team within the company, highlighting that this brand new listing is also very likely a hoax of some kind, regardless of whether or not it has been officially examined. We’ll keep you posted if and when we learn more.”

Valve declined to comment to various gaming outlets. The tedious wait has resumed once again.

ORIGINAL STORY: Valve has filed a trademark, in Europe, for the highly anticipated 3rd entry in the Half-Life series. This could prove as an indication from Valve to finally move forward with the much beloved fps series that put the company on the map.

Thanks to a NeoGAF post, specific details about this trademark are in full display. It was filed on September 29 and lists Valve as its owner. The rest of the file is your regular trademark fare, with the name, owner, and classification of the file, which is described as “video game software”, on display.

The last time a Half-Life game was released was back in 2007. By way of The Orange Box, Half-Life 2 Episode 2 was released as part of the, then, compelling software package. The Orange Box was released for the Xbox 360, PS3, and PC, and contained 5 games for a price of $60. Since The Orange Box Valve has been busy releasing Portal 2, Left 4 Dead, Left 4 Dead 2, Alien Swarm, Counter-Strike: Global Offensive, and Dota 2. Valve also recently announced the SteamOS, a new opertaing system, alongside the Steam Machine and its Steam Controller. The Steam Machine is a hardware gaming device geared towards living room gaming.

Half-Life 3 has become subject to countless amounts of internet memes, rumors, speculation, etc. With every new conference, whether it be E3 or Gamescom, the hope for the impending reveal of Half-Life 3 has always been on people’s minds. With the announcement of the Steam Machines, Half-Life 3 could very well end up as a Steam exclusive. This would provide a smart business move for Valve to entice people to purchase their new hardware.

Nonetheless a new hope for Half-Life has arisen. This time, something less impalpable.