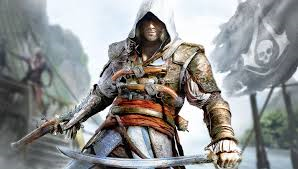 With Christmas just under two months away, two heavyweights come into play in this week’s UK All Formats Chart. This sees Assassins Creed IV: Black Flag climbing to the top to the crow’s nest, holding off Battlefield 4, which comes in at number two.

An advantage was gained however, by Ubisofts’ pirate adventure getting a head start on EA’s shooter, coming out on Tuesday rather than Friday.

Despite these games successes, both of them failed to hit the heights set by their predecessors launch figures. Assassins Creed III and Battlefield 3 are both still the fastest selling games in their respective series, and both achieving the top spot in their first week on sale, according to Chart Track. It is possible, however, that the impending release of Sony and Microsoft’s next gen consoles, which both of these two games are scheduled for release on, may have affected these numbers.

Elsewhere in the charts, last week’s chart-topper Batman: Arkham Origins slips down to fifth, and Grand Theft Auto V drops out of the top three and lies in fourth. A new console bundle has helped FIFA 14 hold onto third in the charts.

Another new release came in seventh, with WWE 2K14, the first WWE game to be released under 2K’s Sports label after the purchase from THQ.

The ever-popular Minecraft: Xbox 360 Edition stills holds on the charts, coming in eighth, Skylanders Swap Force comes in ninth and Pokémon Y manages to beat Pokemon X in the charts for the first time, coming in tenth.

The only other new release to make its first appearance in the charts was the console/handheld release of Angry Birds Star Wars, which comes in at number 30.

The UK All Formats Chart Top 10 (Week Ending 2nd November) looks like this:

The complete Top 40 can be viewed here.

How different will the chart be next week? With an Activision/Infinity Ward game from a famous shooter series coming this week, I think it’s likely there will be a change or two in there somewhere.