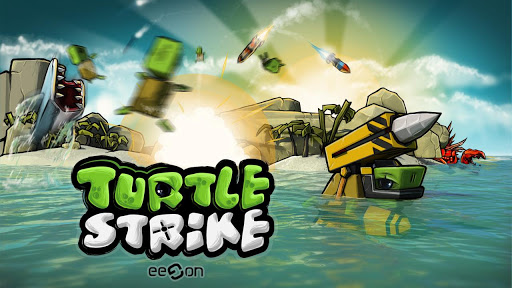 The new strategy title from eeGon, TurtleStrike, is hitting the mobile world on July 25th. This action game for iOS will feature a multiplayer-based gameplay, that includes tournaments with real cash prizes. TurtleStrike has more than 80.000 combinations or armors, weapons and skills, allowing players to define and customize their gaming strategy.

For eeGon “skill comes first” and challenge between players seems a must in a strategy-based title:

eeGon believes that skill comes first, and competitive multiplayer should never be decided by the depths of players’ wallets. To keep matches balanced, players must earn the right to move into higher tiers of equipment with more challenging opponents. This keeps new players from buying their way to the top, and powerful players from picking on the fresh meat.

Choosing your turtle attack skills can be something quite devious in this title; there are several options to create each individual attack panel but keep in mind that using napalm fire or throwing stones with catapults isn’t exactly the same thing. A turn-based system will define each move, however the turns are timed, which obligates players to think quickly but with precision. Check the trailer below: