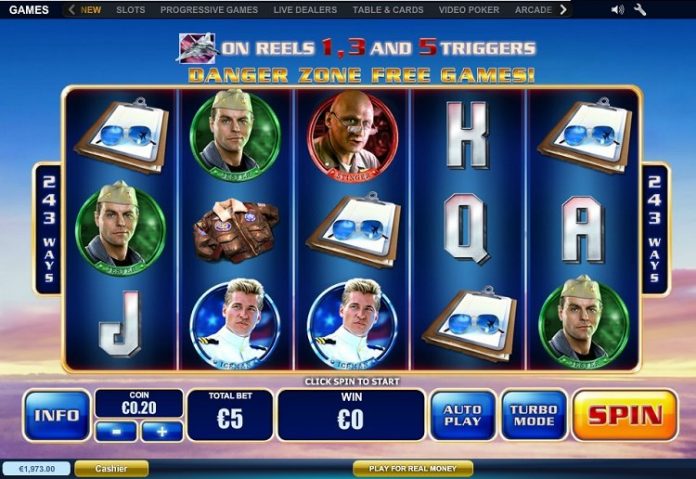 Online slots developer Playtech has officially released the hotly-anticipated Top Gun branded slot across a range of popular online casinos. It can now be played for real money or for free in online casino sites like titanbet and williamhill and in specialized online casino portals like casin.co, where you can find the game in the slot machines section.

The 5 reel, 243 ways to win slot is based on the iconic 1986 movie of the same name that starred Tom Cruise, Kelly McGillis, and Val Kilmer. The movie followed the dramas in the lives of students at the US Navy’s elite fighter weapons school.

This slot will be a big hit with those that either remember the movie being first released and those that have also enjoyed it since. The hit song “Take My Breath Away” by Berlin that was synonymous with the movie plays over the reels to ensure every nostalgic emotion is stirred when players spin the reels.

A range of symbols appear on the reels of the slot relating to characters from the movie. Iceman, Goose, Charlie, Jester, and Stinger are all there but sadly there is no Maverick. Other symbols on the reels include the fighter pilot jacket, clipboard, and the regular Jack, Queen, King, and Ace icons.

The Wild symbol is represented by the Top Gun logo. This symbol substitutes for all other symbols, except for the Scatters, to complete any potential winning combinations that appear on the reels after each individual spin.

The Scatter symbols on this slot are shown in the form of the fighter jets. They are also the key to triggering the Danger Zone Free Games bonus feature. If players hit these Scatters on reels 1, 3, and 5 at the same time then the free spins will be activated. 8 free spins will be awarded to players with the possibility of triggering extra free spins.

This game also comes with Dogfight Wilds. These occur randomly and can be triggered during the base game and the Danger Zone Free Games. When activated, up to 15 Extra Wilds can be added to the reels. In an added bonus, during the Danger Zone Free Games, the Dogfight Wilds are enhanced and there may be even more Wilds added to the reels for the free spins.

The game is likely to prove popular with fans of the movie and players that love their bonus features that are based around triggering additional Wilds. The free spins are far from the most seen in a slot but the chance to re-trigger the spins gives the potential for more to be won. The one downside is that the Berlin track plays on loop and becomes a bit torturous. The big question is why isn’t “Danger Zone” by Kenny Loggins played more?