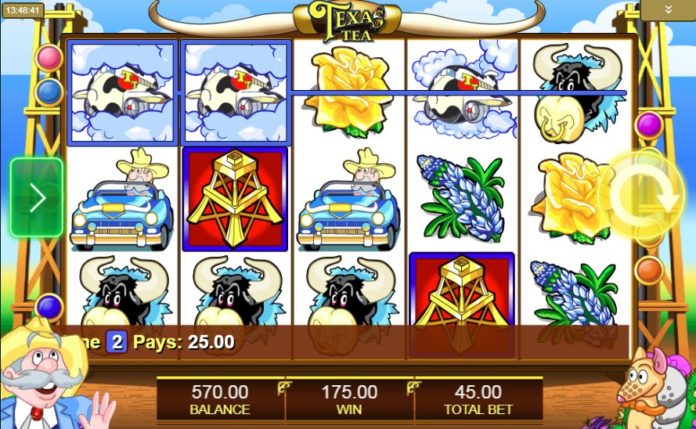 This beautifully rendered 5-reel, 9-payline slot offers up plenty of chances for you to hit black gold and step in to what Texans at the turn of the 20th century called “the gusher age”. Only this time it’s raining bonus features with a 10,000 coins max prize instead of sticky oil.

Packed with two bonus features to match the two golden oil derricks on each side of the screen, Texas Tea is a wild ride to mega cash without wilds.

That’s right, while Texas Tea has no wild symbol, bonus and scatter symbols abound to chalk up incredible prizes.

Texas Ted is your man, a cigar smoking, cowboy hat wearing, bushy white mustached denizen of the Texas oil fields, he serves as the scatter symbol in the Texas Tea online slot. He can appear anywhere, at anytime, just like a gusher from a drill rig and pays out in spades. 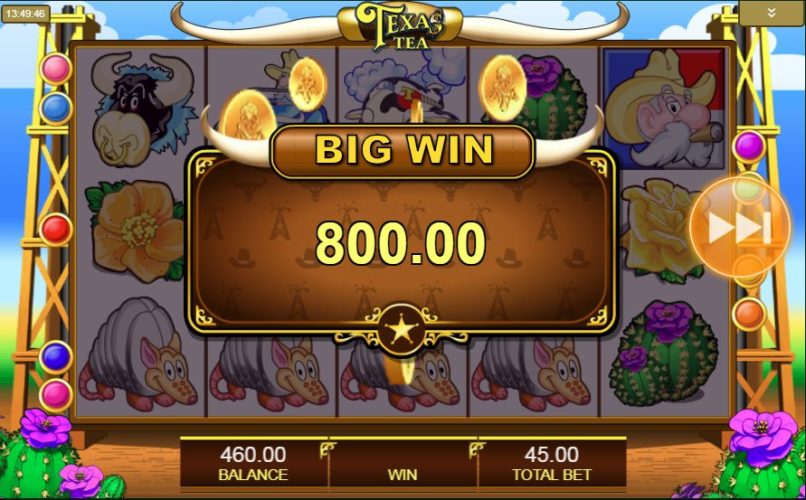 The bonus rounds break down as follows:

Hit the Texas Ted scatter symbol and pick up your oil dividend today!

That’s where the old slots experts’ advise to always bet max can really make your wheels spin. Imagine 100x your max bet! Texas Ted is a good old oil man and will step out in an animated sequence to write you a dividend cheque for your investment in oil.

Big Oil Bonus Game
Three or more oil well symbols will trigger the Big Oil Bonus Game, in which you decide where to look for oil by placing the symbols on any active payline from left to right to reveal your prize.

Other symbols
Filled with a wily armadillo as the highest paying standard symbol, out on the range among the oil derricks you’ll also meet a clever pierce nosed bull, Texas Ted in a long horn fronted Cadillac out for a ride on the range, the yellow rose of Texas, wild flowers and a prickly cactus with purple blooms as they pop up on the reels backed by an upbeat, inspiring soundtrack straight out of an old western. 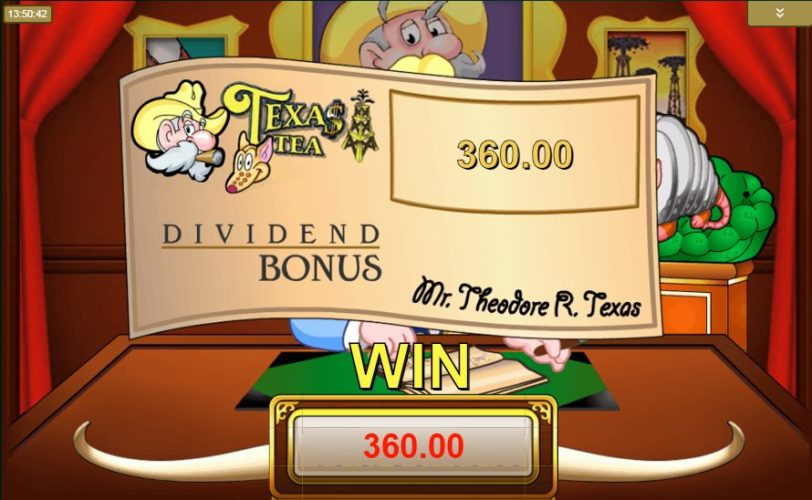 Conclusion
At the end of the day if you’re in the mood for some laid-back Texas adventure, a bit of oil speculation and some time on the range, the Texas Tea online slot machine offers up a fair number of ways to win, two solid bonus features with excellent prizes and prize multipliers, and some good, clean western style fun in the oil fields.

The folks at IGT have kept the game clean, simple, entertaining and vibrant all at the same time. Ideal for slots enthusiasts who are looking for solid, well-paying bonus features without too many over the top bells and whistles. It’s a relaxing and at times extremely exciting ride. With a top prize of 10,000 coins, Texas Tea is definitely a winner, showing an average RTP range of between 87.50% to 96.20%.