When Activision and Infinity Ward had their infamous falling out in 2010, Vince Zampella and Jason West of I.W. formed the cleverly titled Respawn Entertainment, with a promise that they’d surpass the titan that is Call of Duty. Fast forward to E3 2013, Respawn reveals its first project, Titanfall. The game showed off controlled chaos that is almost unmatched in multiplayer shooters as of late, and the reintroduction of Mechs in the mainstream. The reception was warm to say the least.

Last week, Respawn opened up its beta for everyone to register, and after several hours with the game, I can safely say that Titanfall has transcended Call of Duty. 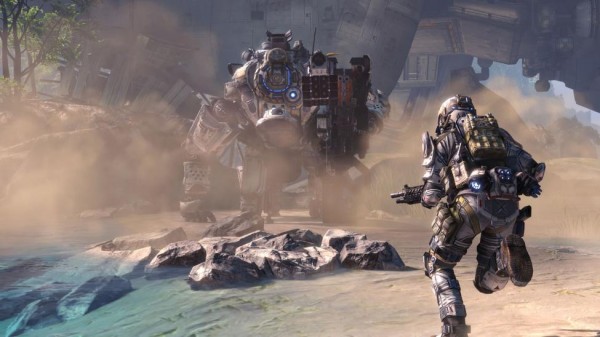 In Titanfall, you play the role of either the IMC or Militia, fighting in a war that stretches through the vastness of ‘The Frontier’, an area in space with clusters of solar systems all inhabited by humans. What makes this war interesting is the fact that you can summon a Titan from the skies after a two minute delay that can also be reduced by killing the enemy. Titans are these monstrous mechs that have dangerous fire-power and a lot of armour plating, and they are no pushovers.

A Titan can dispatch a regular soldier with only a few button presses, but as infantry, you will also have tricks up your sleeve. Infantry units are equipped with a primary weapon, a secondary weapon, and an anti-titan weapon. They’re also given a cloaking ability which could be interchanged if you so desire, and quite possibly the most entertaining abilities in a competitive shooter, wall-running, double jump, and momentum. As a soldier, you can essentially scale any building, bridge any gap, and even jump on an enemy or friendly titan and ride it as if it were a bull. The maps are designed specifically to encourage you to be as mobile as possible, with gameplay mechanics that back it up by allowing you to use momentum to keep you moving. When you combine these ideas with your anti-titan weapon or your primary weapon, you can pull off insane manoeuvres and stunts that could grace any hollywood blockbuster. Titans also have their own arsenal however. 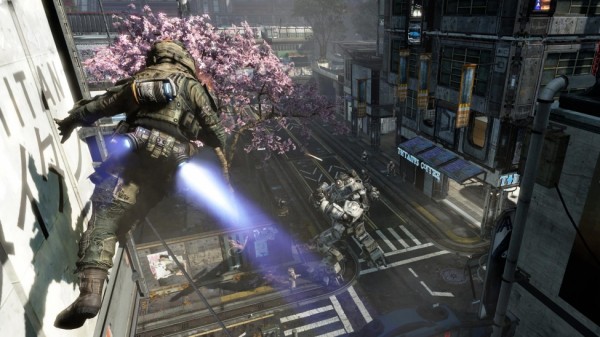 They can have miniguns that fire a tonne of bullets, or slower, more powerful guns that shoot large explosive shells or rockets. They also have a secondary ability which can be interchanged, but as this is the beta, only two exist, and they’re both missile barrages of varying functions. Beyond that, they have a defensive ability which can also be exchanged. You can use a shield which will temporarily absorb bullets for you to hurl back at the enemy, or you can activate a smoke screen that has electricity in it, killing any soldiers that are near or on your Titan and hiding you from the enemy.

Apart from the infantry and titans customization, you get a mechanic called burn cards. These cards are earned via in-game objectives, and offer a temporary boost to your character in a number of ways for that single life, but if you use them, they are taken from your inventory. This mechanic adds another layer of strategy to the game, and offers people who are on the losing side to get a much needed boost. 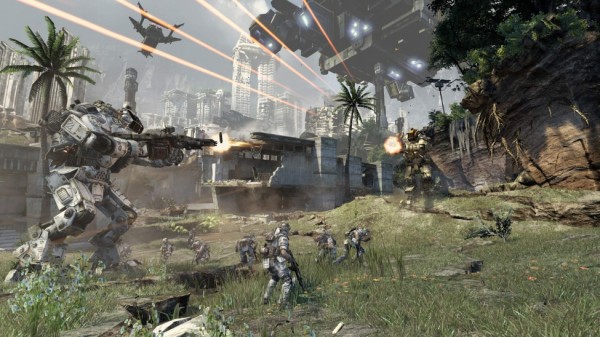 It is this design that is the core of Titanfall‘s gameplay. You can be an agile soldier that uses parkour and anti-titan weapons to wreak havoc and take down Titans, or you can pilot a titan, trading all of your mobility and stealth for a walking death machine. No matter your choice, you are bound to have immense fun, as there are no dull moments and the maps are meticulously designed to keep things fresh. The maps in Titanfall are a lot larger than what you’d be used to if you played a series like Call of Duty. Though the beta only offers two to choose from, both of them are well designed, and it feels as if every single dilapidated building and obstacle has been perfectly placed to allow you to traverse with ease. The one gripe I have with the maps, and Titanfall in general, is that the aesthetics do not stand out beyond the initial glance.

The game is a futuristic sci-fi shooter, so you can expect your typical greys and blues, your war-torn landscapes, your shiny metal and synthetics and your typical slightly varied mechs. The graphics and visual design are not underwhelming, but they lack a certain unique quality that would help push the game forward.

When all is said and done, Titanfall, like Call of Duty before it, set out to define a new generation of first person shooters. If the beta is anything like the final retail release, Titanfall could very well be the future of first person competitive shooters.