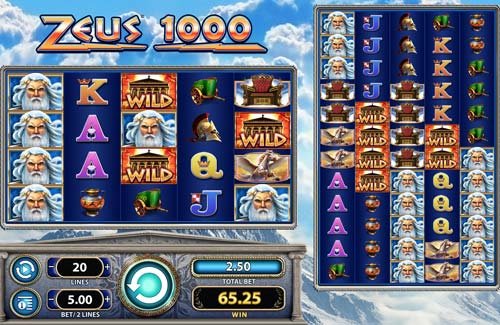 Williams Interactive (more commonly known as WMS Gaming) are well-known for the original and unique online slot gaming engines. They continually develop new engines for games, making them stand out by a long way from anything their rivals can produce. WMS Gaming are also hugely popular in the land-based casino world, where they have developed an exciting range of titles for Las Vegas, and other gambling meccas.

WMS Gaming tends to port their most popular land-based games over to the online casino gaming world, and with over 110 titles to their name, there is quite a lot to choose from. Their first slots appeared online in 2010 (although the company stems back to 1943). Comprising a list of the best online slots isn’t as hard as it sounds, because some of their slots excel above the others. Here’s our list of the top 5 Williams Interactive online slots.

Raging Rhino is one of the most unique games you will find from WMS Gaming. The slot offers up a very winning 4,096 paylines for you to bet on. This African savannah isn’t exactly expensive for you to play either, with players typically wagering up to £30 per spin at most. The non-progressive jackpot is worth around 1,500x your total bet in this slot, which is played over a customised 6-reel setup, mainly to accommodate those four-thousand plus paylines.

Players will also note that Raging Rhino is particularly generous when it comes to features. This online slot comes with a free spins bonus round which can see you win between 8 and 50 free spins in all. Players can also prosper from multipliers which can rise as high as 3x the normal rate of pay. This Any Ways Win slot is certainly deserving of its place in our list, as very few slots can rival it for originality and gameplay.

Whilst its sequels may be more popular than this original title, special mention must be made of this, the first game in Zeus franchise. Launched in 2013, this is the slot which really sets the bar for Ancient Greek mythology themed slots. Its successors may look better, but there is just as much action to be had in this slot as any of those which followed.

Zeus offers 5 reels and 30 lines to bet on and can see you bet anything from 30p up to £150 per spin in all. The jackpot is rather petite (in comparison to other slots from this developer), fixed at 15x the normal rate of pay. This is a slot which allows you to potentially bag 100 free spins, enjoy stacked wilds, and bag big wins with stacked Zeus symbols. It is a credit to WMS Gaming.

The Wizard of Oz slots are one of Williams Interactive’s most popular series, and their Ruby Slippers slot is easily the leading slot in the franchise. Launched in 2013, this slot may appear basic with its 5-reel, 30-line structure, but it is decent paying, and contains considerably better graphics and features than most other Wizard of Oz slots on the market.

With the Wizard of Oz: Ruby Slipper slots, players can pocket extra wild wins courtesy of a randomly triggered Ruby Slipper feature, and they can play an instant win game in the Find the Broom bonus. Play the Emerald City free spins bonus to land free games, multipliers, and yet more wilds, whilst the Crystal Ball Bonus offers you the chance to win lucrative bonuses. Wizard of Oz: Ruby Slippers is a thoroughly enjoyable slot, especially if you love your wild symbols. It can also be found across the online casino world.

This was a major release for WMS Gaming, when it was launched earlier this year. Viking Vanguard is, of course, based on an epic theme which features macho Norsemen, as well as dragons and vengeful gods. This is a fully equipped slot machine game, and the first WMS Gaming slot be played over a 6×4 structure, meaning that players can find plenty of authentic and original gameplay in this slot.

Like many WMS Gaming slots, this one tends to be a bit of a high variance slot machine game, and that won’t suit every player in the casino world. One of its niftiest features, though, is that it is possible to bag 5 random reels, which can turn into wild symbols. Players can also prosper from landing as many as 100 free spins whilst spinning the reels of this slot. This is potentially one of the most fantastical of all the Viking and Norse mythology themed slots out there on the net, so it is well worth a look.

Bier Haus is the number one Oktoberfest themed slot on the net, and with good reason. This slot was a huge hit long before it came to the online casino world. With traditional imagery, mixed up with more thematic symbols, this beer-drinking themed slot is a treat for all players. It features a simple structure and wagering menu, but its 40 paylines can offer up a rather delightful set of wins. In fact, it is possible to win up to 2,500x your total bet with this game.

Free spins are of particular value in this game, and players can scoop as many as 80 of those, with multipliers added to your winnings, too. Locked wilds can be won via golden symbols, and there are two buxom beer wench symbols which can really bolster your wins whilst spinning the reels of this beer themed slot. Even though WMS Gaming isn’t one of the biggest developers in the online slot world, this slot has managed to migrate to most of the top casino sites. It is the leading slot for this theme, and is well worth a look. Again, like most WMS Gaming slots, it is a bit of a high variance slot, though. This means that wins may be few and far between, but they do tend to be fairly big wins when they do come in.

Call them Williams Interactive, or WMS Gaming, this is a company which has produced a number of hits over the years. If you like the look of the games above, you will probably also enjoy Black Knight, and its sequel Black Knight II, Bruce Lee, Kronos, the original Wizard of Oz slot, Spartacus: Gladiator of Rome, Zeus III, KISS, Amazon Queen, Yahtzee, and many more.