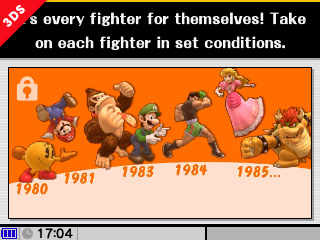 The mode was announced by the games director Masahiro Sakurai in a post on the Smash Bros. Miiverse page.

As with the previous versions of the game mode, you will be pitted against a group of characters who you must defeat. When defeating one group, another will show up. Your character only had a limited time for recovery and there was no option to continue.

This time there is a slightly different take. You will now be facing the games’ characters in chronological order from when they first appeared in their respective games.

The ‘rest area’ between rounds will show you the next set of characters you will be facing as well as the year they were introduced, along with the recovery items and the odd reward. 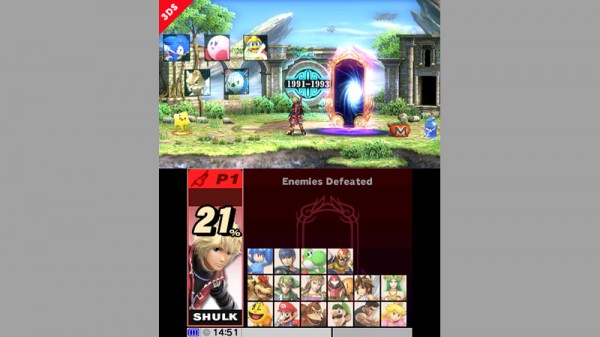 There is more good news for the game, as Sakurai also revealed that All-Star Battle, unlike previous games, will be available to play from the start of the game. The only catch is that you will only be able to fight against characters you have unlocked. Until you have completed the character roster, the mode will feature a padlock in the top left corner indicating it is incomplete.

Currently, 38 playable characters have been revealed for the game with a strong mix of new and returning characters. New characters include Pac-Man, the Animal Crossing Villager, Mega Man, the Wii Fit Trainers, Rosalina, Shulk, Little Mac from Punch-Out, Greninja, Mii Fighters, Palutena and Lucina and Robin from Fire Emblem.

Super Smash Bros. is set for release on the 13th September in Japan and the 3rd October in North America and Europe.

What are your thoughts on this idea for All-Star Battle?