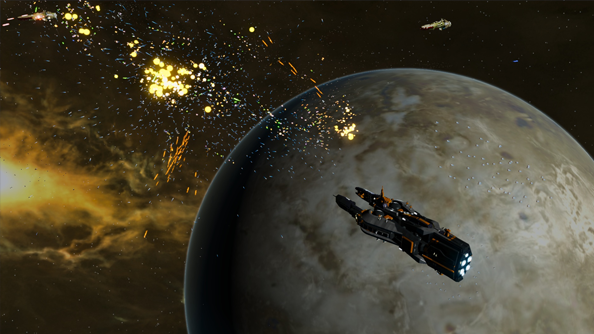 Oxide Studios have released Star Swarm Benchmark on Steam to demonstrate the capabilities of their Nitrous engine. Purportedly it will be able to give video games movie class space battles, with thousands of ships all acting on their own AI and every bolt of laser fire being an individual physics object. First used as a stress test, Star Swarm caught public attention after a video of it in action appeared on YouTube, so it was decided to make it into a benchmark that people can try at home. As it’s a simulation, the outcome is said to be different every time.

And while the publishers stress the benefits of AMD Mantle API – going as far as to give a link to drivers on the Steam page – people without next gen AMD graphics cards can enjoy it too.

At the time, three games are developed with Nitrous engine: an unnamed Oxide project, Stardock’s alternate reality prequel to Star Control and Mohawk Games’ project Mars. So far, the eggs seem to be in Stardock’s basket, because Oxide is supported by the company while Mohawk Games was established with funds from Startdock Strategic Investment Fund. However, the company already employs proven talent (Civilization IV’s lead designer as well as an art designer and the lead designer from Galactic Civilization). With Galactic Civilization and Sins of a Solar Empire under its publishing belt, Stardock seems to be in good position to publish a quality space game, although Star Control probably is not the series to utilize Nitrous’ capabilities to full extent.

On the other hand, space games are on the upswing in the recent years, as well as being one the remaining dependable source of both RTS and 4X games. Who knows, maybe this will encourage Disney to order a sequel for Empire at War.

Thanks for the tip, PCGamesN!