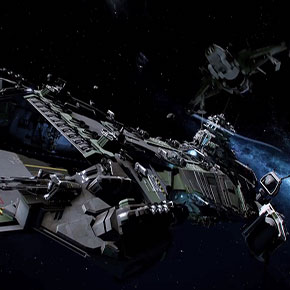 The upcoming and highly anticipated space simulator Star Citizen, from Chris Roberts and Cloud Imperium Games, has reached its most recent fundraising goal of $25 million. Roberts revealed, on the game’s website, that the game reached $24 million in funds just last week, with $1 million raised in only seven days.

“This milestone also means that October has been our biggest month for crowd funding yet,” Roberts writes. “That’s truly astounding.”

This new fund will allow Imperium Games to expand Star Citizen’s Alpha phase, which will allow for more player slots after Alpha launch and expanded servers.

“Extra alpha slots not only means more Star Citizens will travel the ‘verse at launch, but that we will receive more feedback and more stress testing,” Roberts explains. “This in turn will allow us to better balance and enhance the Star Citizen experience.”

The team’s next goal is $27 million, which will let the studio implement ‘Banu’ technology into the game.

“At $27 million, we will expand that same thinking to the Banu, Roberts says. Starting with the merchant ship, the design team will expand Banu technology to offer players a completely different way of experiencing their universe.”