If you got tired of the same ol’ game mechanics that seem to apply on all Facebook titles, then you should definitely give Catch a Killer a try. Created by Sony, the game basically erases the difference that existed until today between social games and titles that you can play on your computer after you pay for them. Yes, you’ve read it right: Catch a Killer is a gem of a game and for similar products you can end up paying up to $40 IRL!

Based on James Patterson books, the game puts us in the shoes of a crime investigator: we will need to collect clues, search for evidence, investigate different crime scenes and feel like real life detectives in a game that doesn’t say “No” to amazing visuals and well made cinematic videos. 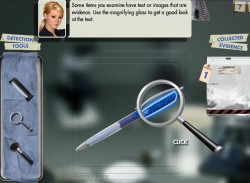 Mostly, Catch a Killer is a hidden object game, meaning that you will need to “search” a crime scene and find the indicated objects in a really crowded place. Fortunately, this won’t kill your eyes since the objects you need to find are pretty simple to find and well drawn, but the problem might be that you will need to spend some time actually playing the game: unlike other social games, Catch a Killer is a title that need your attention and you might end up playing it continuously for 30 minutes or so (or as much as you have until you empty up your energy).

But there are other things you’ll do except for searching for objects: investigate evidence using detective tools (to find clues, fingerprints, stains and so on), you’ll even interview people and do everything that a real detective would do, minus the doughnut eating.

Because you need energy in order to complete tasks and progress with the case: you get one extra energy every 5 minutes, but since you need up to 6 energy to search a place, it is best to have some friends playing and have them send over some energy.

The only problems I can see related to Catch a Killer which is by all means an excellent game, is the fact that as things stand right now it can’t go viral because we don’t really have many ways to let our friends know about its existence; also, since it is so rich in content, it takes quite a while to load and slower internet connection might probably take up to a few minutes to load each area, which might get a bit frustrating for some.

However, I do recommend Catch a Killer to everybody – even though it’s not your regular social game, it is one you should try – so head over here and have fun!