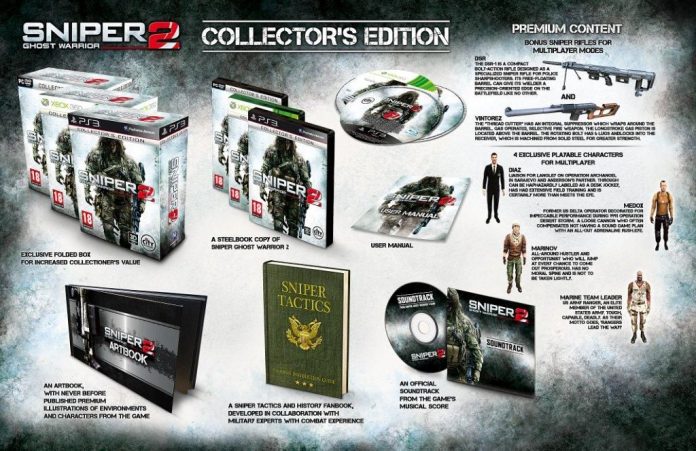 I am sure that you can hardly wait to become a Ghost Warrior once more and fortunately, there’s not long left until the release of Sniper Ghost Warrior 2, a game that promises to be even better than the original. Of course, for the most hardcore fans of the game (now powered by CryENGINE3), there are two premium editions that you can choose from: the Collector’s Edition and the Limited Edition and I have the details for both.

– A steelbook copy of Sniper Ghost Warrior 2
– A ‘Sniper Tactics and History’ hardback book, developed in collaboration with military experts with combat experience
– A lavish artbook with never before published illustrations of environments and characters from the game
– An official soundtrack CD
– The DSR-1 in-game sniper rifle for multiplayer modes
– The Vintorez in-game sniper rifle – AKA the ‘Thread cutter’ – for use in multiplayer modes
– Four exclusive multiplayer playable characters (Diaz, Medox, Marinov and Marine Team Leader)

The Limited Edition also offers a nice value for money, coming in a O-card packaging and including:

– The Vintorez in-game sniper rifle – AKA the ‘Thread cutter’ – for use in multiplayer modes
– Anderson – game protagonist, ex delta-force sniper wearing an exclusive ghilie suit – as a playable character in multiplater modes.

Sniper Ghost Warrior 2 will be released on August 21, 2012 and you can purchase it on Amazon.