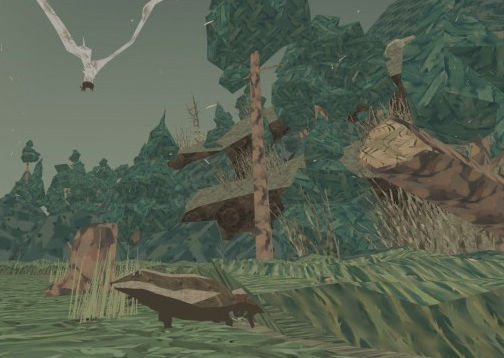 Might and Delight today released the first gameplay footage for the upcoming badger sim game Shelter. Shelter puts players in the shoes of a badger mother who must care for her cubs.

According to Andreas Wrangler, lead level and game designer for Might and Delight, the game is still “very much under development”, but the developers feel that it’s shaping up quite nicely. As such, the team “couldn’t keep things under wraps any longer.”

The video is fairly short, but it does give a bit of a glimpse at the food mechanics that will be involved in the game. According to the developers, hunting for food will be one of the largest focuses for the player, with their cubs slowly growing in size depending on how well they’re fed. The larger they get, the more they’ll be able to help out, which encourages players to get as much food as possible by killing foxes and grabbing plants.

At the same time, venturing out into the world appears to have some dangers, coming in the form of forest fires and massive eagles that can kill badger cubs if the player isn’t careful.

Shelter is currently slated for release later this year, and will be available on both PC and Mac.