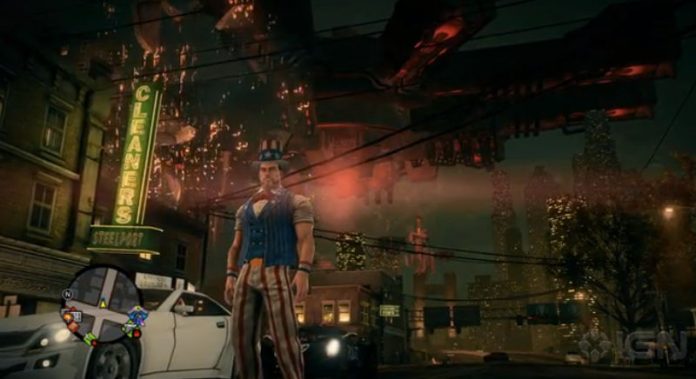 In a video today on IGN, the team behind Saints Row IV showed off seven minutes of gameplay from the upcoming game.

Immediately apparent is the alien skyline, filled with odd looking buildings and spaceships. Apparently this setting is a virtual version of the Steelport seen in other games, with a Matrix vibe. This vibe is continued by the alien Zen featured in the game, which seem to use a Mr Smith style transformation to take over police officers.

The majority of the video is based on combat however, with guns that force enemies to dance dubstep style and a laser that causes people’s heads to inflate and then explode. Apparently these weapons will now have customisable looks as well as upgradeable stats, with the video demonstrating a guitar case rocket launcher. Saints Row IV will also feature a full mecha suit, equipped with jump jets, rockets and miniguns.

The gameplay shown also highlighted the superpowers of the main character. While some of the abilities such as super speed and flight have been seen in other videos, the new powers of telekinesis and freezing blasts were shown off. The video also demonstrates some of the combos that the president can pull off, to fairly brutal effect.