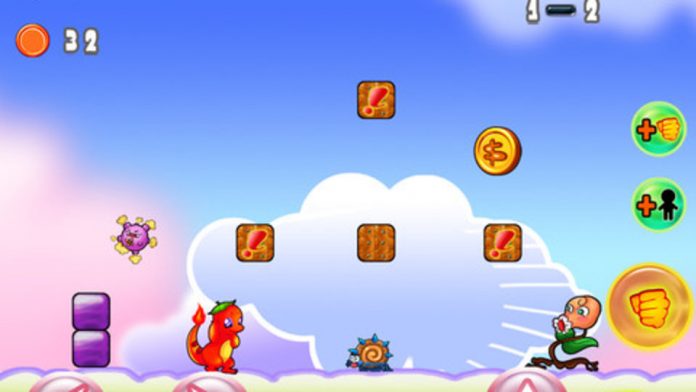 I remember writing about SkyFar a rip-off of Vlambeer’s Luftrausers, and at the time, I thought it was a rare occurrence, but before I knew it, this weekend has graced us with a couple more similar games in record frequency. The real question now is ‘how bad can they get?’ Vying to answer that question, we now have Sango Fight and (get ready for this) Super Monster Bros by Adventure Time Pocket Free Games. Yes, that is the full title, no it was not in fact made by Adventure Time Pocket Free Games, it was made by Mario Casas, but that’s beside the point.

Now, Sango Fight was just a $.99 game–a quick cash grab, which will hopefully be refunded without any embarrassment, but it’s a hold-up in a dark alley, then Super Monster Bros by Adventure Time Pocket Free Games (SMBATPFG, from now on, not that the acronym is any less cryptic) is a full-scale bank robbery, and I am talking about the World Bank here, because this game tries to sell you $100 in-app purchases, on several occasions! I haven’t seen anything like this since Smurfs’ Village was slinging $100 Wagons of Smurfberries to unsuspecting kids. It deserves at least the same summary the last game did:

SMBATPFG is but one game in a series of titles that essentially clone each other; they include this game, of course, as well as Adventure Games Time Super Squirrel Bros Plus and Adventure Games Super Monster Bros Plus. It is essentially a platformer Mario Bros clone, with the added feature of being able to fire ranged projectiles at enemies. Until you run out, that is, at which point can pay $1.00 for 30 more attacks. Starting out, the only character you can play as is Charmander (he wears a beret, so it’s different), but you can unlock other characters (there are palette swaps in there), for a price (ranging from $5.00 to, yes, $99.99). As seen in IGN’s video, a multitude of other items are available for purchase at exuberant prices, and there are naturally advertisements floating about now and again, peppered with sound bytes ripped directly from other games.

As said in Polygon’s article on SMBATPFG, it is quite odd that Apple will stop some games from getting onto the market, like Auroch Digital’s Endgame: Syria (for mentioning specific groups and using the word Syria) and Sweatshop HD (a game meant to raise the issue to public attention, but was blocked because the subject matter was ‘uncomfortable’), and yet this entire slew of Body-Snatcher games get through. One may be reasonable in assuming it has something to do with exuberant prices on in-app purchases.