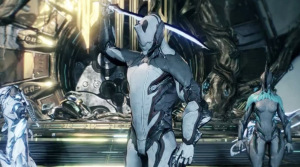 Sony has announced, via their twitter, it’ll be making certain PS4 titles available for pre-order through the PSN store ahead of the console’s launch. The first two titles the company will be rolling out are Knack and Warframe.

Knack is a platformer developed by Studio Japan, with PS4 head architect Mark Cerny leading the project. Warframe is a free-to-to play 3rd person cooperative shooter developed by Digital Extremes. Both titles are set to launch on November 15 alongside the PS4. Sony will most likely make games such as Killzone: Shadow Fall and Drive Club available for digital pre-order,but specific third party titles is something we’ll have to look out for.

The company is no stranger to digital pre-orders and day one downloads; Sony have been rolling out these digital programs for a better part of a year now. Just recently consumers were able to pre-order and download NBA 2K14 the day of it’s release, so this PS4 digital initiative is not all that surprising.

Just in case if you pre-ordered a Watch Dogs PS4 bundle before the game’s delay, important information regarding this pre-order was detailed yesterday.