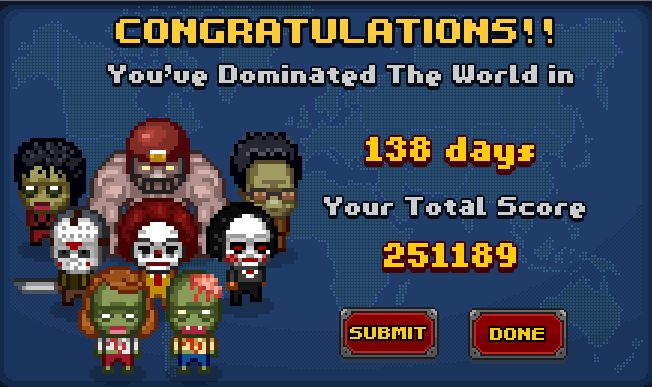 Instead of writing this article, I decided to spend 138 days in Infectonator 2 to take over the world with my army of zombies. This is just a little warning, to tell you just how addictive the game really is, and a solid reason for me to recommend it to you from the bottom of my heart.

Basically, your goal in Infectonator 2 doesn’t vary much from that of the original: you need to take over the world and in order to do that, you build an army of zombies, get upgrades and support like grenades, traps and a green goo that turns people into zombies and you’re done!

You have many cities from the real world to take over, one by one, to destroy them if you can by completing a series of4 objectives per each game. And even though at first you won’t care too much about objectives, you will eventually do so – at least I did in the end and I got to regret that I didn’t do my best to destroy the cities from start.

The game has a really addictive gameplay: I promised myself several times that “this is the last city” but simply I couldn’t stop until all the world was mine: I had upgraded zombies, Michael Jacksons that froze time and a lot of FBI dudes to turn into little zombies. So, for me, these are enough reasons to keep me going.

And I am sure you will have an equally great time when you play Infectonator 2, so head over to Armor Games and have fun!