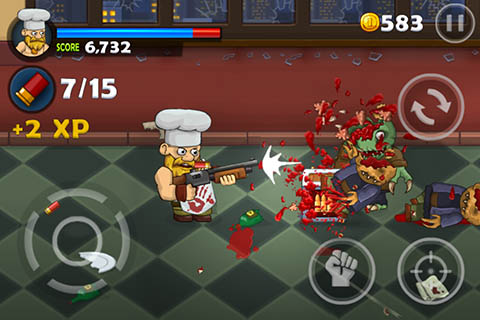 FDG Entertainment announced today the release date for its upcoming action game for mobile devices, Bloody Harry. This title features an enthusiastic cook and a peculiar world, where vegetable zombies exist. In order to produce organic recipes, the protagonist must defeat different types of zombies.

Bloody Harry promises to bring a mix of blood and gore in a breath taking action game. There are countless weapon types and battle moves to defeat the deadly creatures. The in game challenges normally involve cooking and the whole point of defeating certain monsters is exactly to obtain a specific ingredient. FDG Entertainment commented about some of the upcoming features on Bloody Harry:

There’s a never-ending supply of Weapons, Ammo and reasons to chop, smash and shoot them into pieces. While you fight your way through the hordes of foul creatures, you’ll eventually climb the career ladder in the global high score list. You’ll also run into giant boss-zombies which may eat all your ammo before they finally make a return as harmless dessert. Sounds tasty you say? It is!