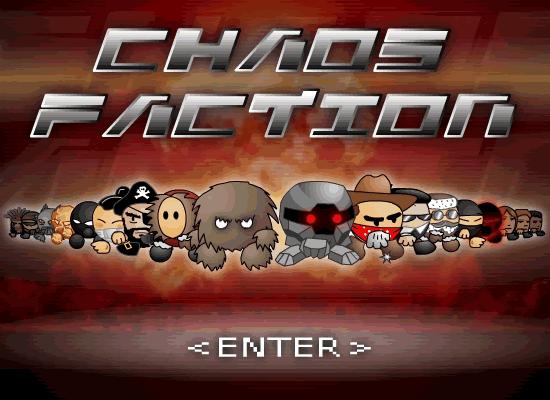 Chaos Faction is your classic super smash brothers look-a-like. The action elements are wonderfully made and the variety of weapons only seal your fate as a dedicated player. What sets this game apart from the others, however, is the the strategy and tactics the player may have to use in order to advance.

The controls are typical of any flash game; movement is done by way of the arrow keys, punches are thrown using the “Z” key, and kicking is done by the “X” key. All of the controls can be changed in the settings menu. In both Chaos Faction and Chaos Faction 2, gameplay is hilariously entertaining especially Campaign and deathmatch mode. Out of the two, only the sequel allows you to enjoy the game with a friend.

In campaign mode, the player fights through a multitude of levels chock full of enemies to fight in order to reach the Boss stage. In Chaos Faction 2, everything is a bit more dynamic. More stages, more character customization options, and even more weapons.

Deathmatch is where you and a friend can duke it out for supremacy. Multiplayer is only available in Chaos Faction 2 though, but in order to completely appreciate Chaos Faction 2, it is imperative that you experience its predecessor.

A great game in every aspect and a must for flash takers. Enjoy!