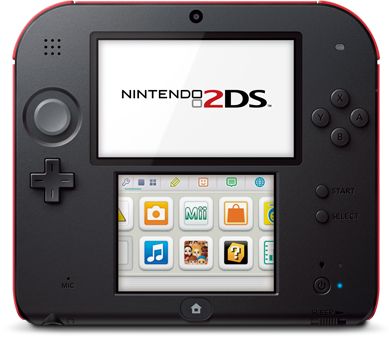 In a press release sent out today, Nintendo announced the next handheld gaming system in the DS family. The 2DS will be available to the world on October 12th. Part of the 3DS line, the 2DS will allow players to play 3DS games in 2D. The system will also support backwards compatibility, allowing the entire library of DS games to be played. Nintendo explains it more in their press release:

Nintendo 2DS plays the entire library of packaged and downloadable games for Nintendo 3DS only in 2D. The system features a distinctive fixed, slate-type form factor, and optional carrying cases will be available in Red or Blue at launch at a suggested retail price of $12.99. Nintendo 2DS maintains many of the same hardware features as Nintendo 3DS: dual screens, game-play controls and touch-screen features. The system also has backward compatibility with the existing library of more than 2,000 Nintendo DS games, as well as access to wireless connectivity features like multiplayer online game play, fun Nintendo Video content and great digitally delivered games in the Nintendo eShop.

Nintendo said the suggested retail price is $129.99 USD, making it cheaper than it’s 3D counter part. The new feature the 2DS has is the slate shape of the console. You can check out the launch trailer below to see the new shape and the console in action.

As always, keep your eyes here for the latest news about the 2DS and other Nintendo related news.