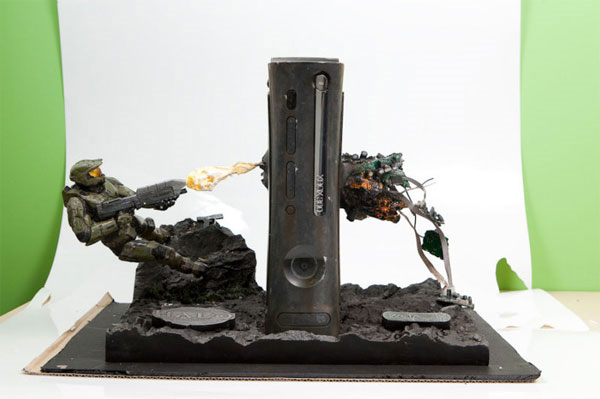 The day is May 12, 2005. Apple’s silhouetted iPod commercials mirror the relevance of the device itself and that of MTV. Elijah Wood is in the midst of his post “Lord of The Rings” stardom and the eyes of America are on him as he hosts an Xbox and MTV collaboration event. Microsoft is climbing out of their bunker after the thrashing they received from the Playstation 2, and they are ready to get a head start on the next battle.

Right off the bat they were toting the digital future (promising to change digital entertainment forever) and “the future of gaming” was revealed with a console shot, and the system boot screen. The first official mention of “Xbox 360” was uttered so casually that it made it seem immediately normal, not necessarily as ridiculous as it may have felt in rumors. The reveal videos looked great, including a 100% CGI Madden video and a not-too-shabby Saints Row clip, and the next generation felt in full swing already. This biggest push was that of Perfect Dark Zero, which seemingly scratched that nostalgia itch and ramped up all of gaming in one package. With their big reveal completed, it was clear that they had the momentum. Sony was sitting quietly, confidently. More would be revealed at E3 for both.

That June, E3 came and went. Microsoft showed the console again, referencing the future of entertainment again, and stressing playing with friends and customizing games to ones preference. The first appearance of the “blades” dashboard seemed so great at the time. Clean and organized. Even then, though, the faceplate changing gimmick was lackluster. Games were shown, we all know how these things go, but they mainly made promises of digital entertainment, that they did fulfill eventually, and “the most powerful game console” which is debatable at best from a hardware standpoint. They also shared numbers on their Xbox Live platform, and promised to take it to the next level with the player cards featuring a bio and gamer pictures, among other things. Microsoft came out as clearly a company serious about its games division. They knew what would excite people, and they stuck with what they had, in stark contrast to the company today. The console would release in the holiday season of that year, to no competition from Sony, or Nintendo for that matter, and with its release the origin story of the Xbox 360 ends.

It’s the 23rd day of November in the year 2005. The Xbox 360 hit store shelves yesterday, and reports that Microsoft began mass production on the console a little over two months ago were confirmed by empty spaces that now filled shelves. Well-off families head to Ebay to find their child’s most sought after Christmas gift. Microsoft is off to an amazing start. With a list of decidedly launch-quality games, the Xbox 360 enjoyed the fervor of customers in an uncontested holiday season. The momentum would continue into the foreseeable future as they continue to support the system with quality games. Some bad press would soon hit, however, in the form of a seriously high failure rate due to the “Red Ring Of Death.” The company quickly instituted a longer warranty against the problem and was providing Xbox Live monthly cards for inconvenience when they were replaced. The steps they took severely minimized the general backlash for the systems failing. The first year of the Xbox 360’s reign was a booming success.

Over the course of the next couple years, Microsoft would take to the stage at E3 and continue to push games on their systems. They would introduce HD updates for classic arcade and legacy console games such as Sonic the Hedgehog and Contra in 2006, marking the rise of the Xbox Live Marketplace. That year, they would also debut sequels to some of their most popular series like Fable and Halo, along with some new IPs that would be exclusive in FEAR and Gears of War. The conference in 2007 was again about games, rather than the console itself, with the appearance of Mass Effect and more Halo 3 to scratch that exclusive games itch. The company clearly held games first in its mind, as it had all along, but had yet to truly innovate digital entertainment as they had promised.

It was in 2008 where things really started to change with the Xbox 360, showing that they would continue to up the ante with their system. A complete overhaul to the once-shiny, now-dingy dashboard was in the cards for that fall, as well as the introduction of avatars, to further personalize the console experience. Immediately after the GUI update (dubbed Next Xbox Experience by the founders) the Xbox 360 as it had been recognized was gone, and with that change in appearance seemed to come a change in identity. It was in this period when they started their independent developer friendly system, which lead to the launch of Braid, and that lead directly to other indie projects jumping on board for the next several years, especially when they introduced the Xbox Live Indie Games section in which those who desired could make a game in XNA and attempt to publish through Microsoft.

A year later, when the console was at the height of its life, Microsoft announced the Kinect at E3 2009. In what could be viewed as an extremely late gut reaction to the success of the Wii, the initial announcement of the Kinect was met with a mixture of wonder and reservation. The technology behind the controller-less gaming concept was fascinating, but it remained unclear whether it would pan out in an effective way to make it worthwhile. It would not be until a year later, November 2010, when consumers would get their hands on it (along with a redesigned, slimmer console) to see if it was worth the hype. It was the release and subsequent content focus on the Kinect that may have changed the Xbox 360 landscape once again.

The next few years, leading up to the present, see the console fall from grace in large part. There were a few more drastic dashboard updates, which evolved with Windows 8 and kept the interface from growing stale, but Microsoft was so desperate to push the Kinect, a device that was not catching on with consumers, it seems the company lost focus on its core games. Even its stock of indie games had a severe downgrade in quality and quantity. They even went so far as to hide the Indie Games store front with one of its most recent dashboard overhauls. To their credit, though, they continued to add entertainment apps to the system to further its status as an entertainment hub. From Internet Explorer to an IGN news app, the console was trying to become a living room PC, minus the games, it seemed. Of the few exclusives the console held in the most recent years, most centered around the Kinect, and a large chunk were not received well at all. (I’m looking at you Steel Battalion and Gears of War: Judgement!)

Fast forward to the present day. The Microsoft has released a second console redesign, which looks closer to their next console than the current, the average console has more apps installed on it than games, and a startling one (1) exclusive has been released this year. Microsoft has clearly been prepping for the next generation battle (which is an entirely different subject) at the expense of supporting its current console which will ultimately shun the loyal fans who cannot afford or find an Xbox One on the shelf for the next few months or more. And while they have back-pedaled their way into a pretty nice looking console this fall, they may start the next generation as they ended this one– limping.